Former treasurer puts Acsa and SAA deep in the game with …

africa November 27, 2020 Africa Comments Off on Former treasurer puts Acsa and SAA deep in the game with … 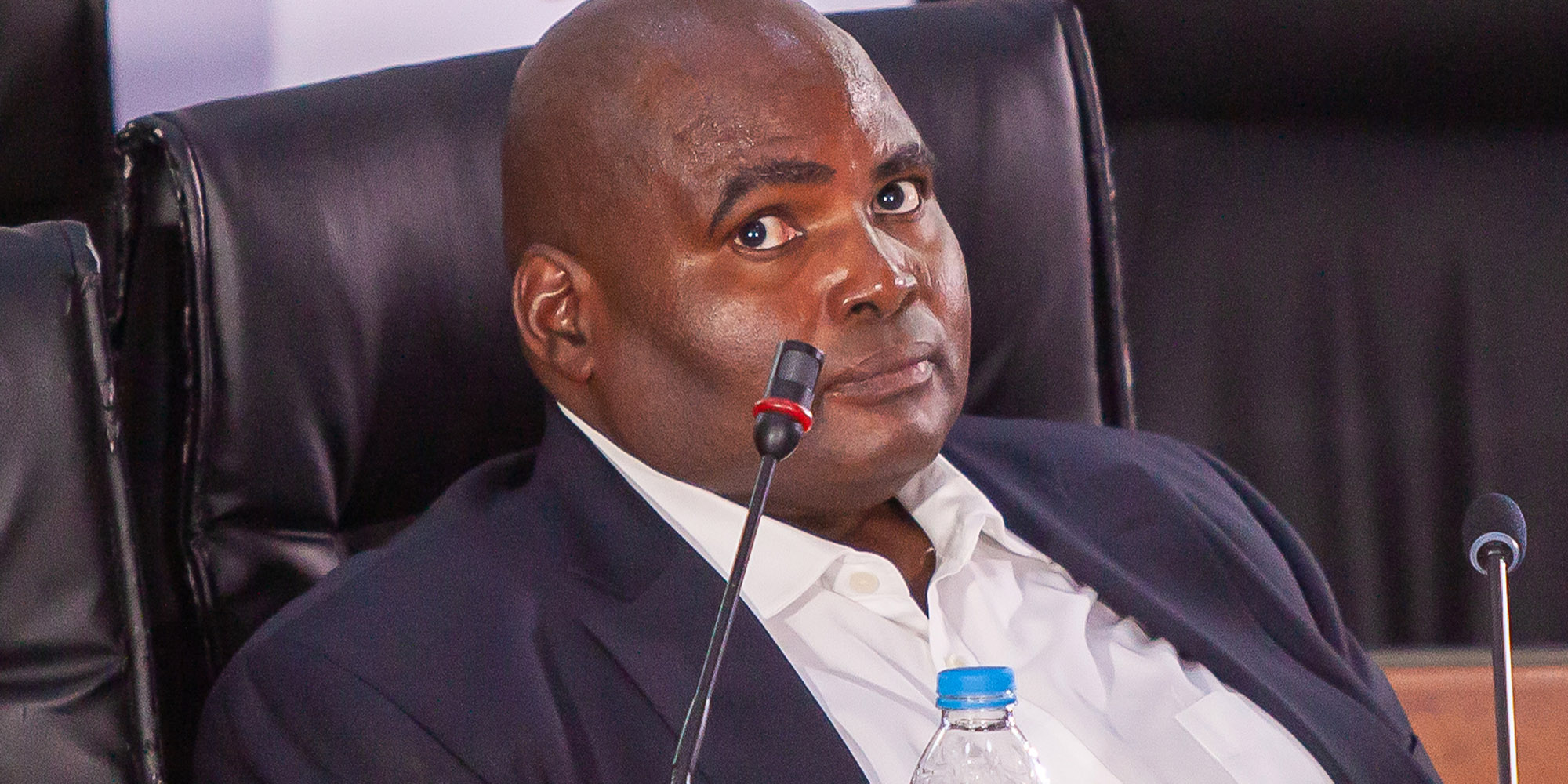 Phetolo Ramosebudi said he understood regiments had a mandate from Acsa, which took place prior to his appointment, to develop a financing plan for the company. (Photo: Gallo Images / Papi Morake)

Interest rate swapping on billion-dollar loans, leaked tender documents, bribes from banks and shell companies all come to light on Thursday before the Zondo commission, with Regiments Capital in the lead.

There are not so many “I ask not to answer the question so as not to incriminate myself” answers for the Zondo Commission as heard on Thursday, November 26 since former SAA chairman Dudu Myeni took the stand.

Witness Phetolo Ramosebudi’s requests to withhold answers took effect when Evidence Leader Matthew Chaskalson handed over damning emails pointing out Ramosebudi leaking internal tender information to Gupta-linked company Regiments Capital while he was treasurer at SAA, and millions received from regiments for making money through interest rate swaps on one billion rand loans while being treasurer at the Airports Company SA (Acsa).

Evidence was also provided that there was collusion between regiments and Nedbank at the expense of Acsa.

Contrary to his general requests to the Committee Chair, Deputy Chief Justice Raymond Zondo, to exercise his right to remain silent when it came to SAA or the payments he received from regiments, Ramosebudi was relatively open when it came to answering questions about financing arrangements at Acsa, where he was treasurer from 2007 before moving to SAA in late 2011.

It is worth noting that Ramosebudi worked in asset management at Nedcor Group before joining National Treasury in 1998, and from 1999 to 2002 for the Development Bank of Southern Africa (DBSA). Both Nedbank and DBSA appeared in Acsa-related evidence of swapping interest rates on a R1.5 billion loan.

The day began with Ramosebudi saying he understood that regiments had a mandate from Acsa, prior to his appointment, to develop a financing plan for the company.

Although he approved payments to regiments and assisted in receiving fees from Nedbank and Standard Bank for the work they performed on Acsa’s behalf, he said he did not know whether the correct procurement processes had been followed in the appointment of regiments, or whether the regiments mandate to execute the financing plan it was paid to develop as Regiments was appointed before joining the company.

Asked whether regiments have received compensation from Acsa for providing advice to participate in the DBSA loan, Ramosebudi said, “I think so.”

Chaskalson then produced emails between Nedbank and Regiments discussing the fees they would earn from the interest rate swap, as well as invoices from Regiments to Nedbank indicating that they were taking money from both sides. Ramosebudi said he knew nothing about this.

I submit to you that, at best, you were seriously negligent in allowing these transactions to take place without verifying that they had the authority.

However, Ramosebudi’s alleged lack of knowledge was called into question by a correspondence between Regiments and Standard Bank, in which Standard Bank asked for proof of its fee agreement with Acsa, to which Wood replied that Ramosebudi had been informed of the Regiments’ fee .

Under questioning, Ramosebudi said Wood indicated who he informed about the compensation, not who authorized it.

“I wouldn’t have known if he had jurisdiction as I hadn’t seen the mandate,” he said, to which Chaskalson said Wood cited Ramosebudi as the authority confirming that the regiments could charge a fee of more than R10 million. He noted that this would eventually be paid by Acsa as part of the interest rate swap fee to Standard Bank, but Ramosebudi never checked whether Regiments could accept this fee.

However, Ramosebudi said he confirmed to Standard Bank that Regiments was executing the transaction on Acsa’s behalf, raising Zondo the question of why Regiments should have a discussion about compensation at all if it fell within their existing agreement. Ramosebudi admitted that the compensation may have been outside the terms of their agreement.

“I put it to you,” said Chaskalson, “that you were at best seriously negligent in allowing these transactions to take place without verifying that they had authority.”

Ramosebudi argued that he believed the regiments’ work was valuable, to which Chaskalson replied that even if it were, the procurement process did not work that way; to let one person decide whether there was value in a transaction or not.

Ramosebudi shifted responsibility upstairs to Acsa’s finance director and board, but then said he couldn’t remember telling anyone about the interest rate swap fees paid by the regiments.

What was special about the money that regiments made from the interest rate swaps was that the swaps were not in Acsa’s books, so if Ramosebudi didn’t tell anyone, they wouldn’t be collected. The money was paid by the banks to the regiments, while on the Acsa side it was only shown as payments to the bank.

Looking at Acsa’s books, it was not possible to see that Nedbank had paid R24 million to regiments from fees charged to Acsa, or that regiments had claimed R22 million on a R1.7 billion loan from Standard Bank , Chaskalson noted.

He then produced a series of emails from Ramosebudi to Regiments’ Wood from December 2009 to April 2011. These contained invoices to regiments on behalf of various companies owned by Ramosebudi, or in one or two cases his Psychology brother Ramosebudi. These amounted to a total of R9.1 million.

Corresponding bank statements showed that between June 2010 and October 2013, more than R5 million was paid by Regiments to Ramosebudi for various billed services, including the provision of spirits and catering from his company trading under the Venus Liquor name, actuarial services to Ramosebudi’s business Riskmaths Consulting, and to his company Rams Capital.

It was during the presentation of this evidence that Ramosebudi invoked his right not to incriminate himself.

Chaskalson then presented an email trail from Nedbank, in which Ramosebudi was copied, showing that Acsa would have had to pay R292.5 million on July 19, 2011 if it wanted to break away from the interest rate swaps. Ramosebudi said he could not remember this.

His request to invoke his right not to incriminate himself continued throughout the afternoon as Chaskalson replenished Ramosebudi’s tenure as treasurer at SAA from December 2011 to 2015.

Chaskalson then produced a spreadsheet that he said was an internal regimental document showing the revenues generated by McKinsey’s advisory unit and the payments it had to make to business development companies, “mostly empty companies founded by Salim Essa.”

The evidence presented began with an email from Ramosebudi to Wood on October 14, 2013 containing a draft of the request for proposals related to the tender, which was very similar to the last request for a proposal sent to the Commission on November 19, 2013. bidders was sent a little over a month. later.

Then, according to Chaskalson, using a methodology where Ramosebudi first forwarded the email from his SAA email account to his Rams Capital email account before forwarding it to Wood and others at Regiments, he sent the evaluation criteria of the tender on October 28 to Regiments. 2013.

The next day, he sent an invoice from his company Rams Capital to Regiments for R375,606, which, according to bank statements, had been paid in full on November 11.

Chaskalson then produced emails showing how Ramosebudi, using the same methodology of first forwarding what he had received in his SAA email account to his personal Rams Capital email account, Regiments and McKinsey (with whom Regimental joint venture to bid on the tender) to date with what rival bidders were submitting.

It appears that Ramosebudi went so far as to use his influence to adjust the bid evaluation criteria to McKinsey / Regiments, helping to keep their bid below R 100 million so it wouldn’t have to go to the SAA board. to go.

It appears that the McKinsey / Regiments joint venture charged between R70 million and R85 million to release R1.2 billion in funding for SAA, while a rival bidder, Boston Consulting Group, had two options; one for R 14 million and one for just over R 10 million.

When it appeared that the tender evaluation was not leaning towards McKinsey / Regiments, Ramosebudi stepped in, stating that he was “deeply dissatisfied with the way the tender was conducted” in an email to his colleagues.

An email from McKinsey to SAA on February 26, 2014 expresses the company’s gratitude for receiving the work.

Chaskalson then produced a spreadsheet that he said was an internal regimental document showing the revenues generated by McKinsey’s advisory unit and the payments it had to make to business development companies, “mostly empty companies founded by Salim Essa.”

These shell companies, Chaskalson said, were used to channel up to 50% of the revenue of state-owned companies.

When asked if he knew that SAA money was being funneled into shell companies, Ramosebudi asserted his right not to incriminate himself.