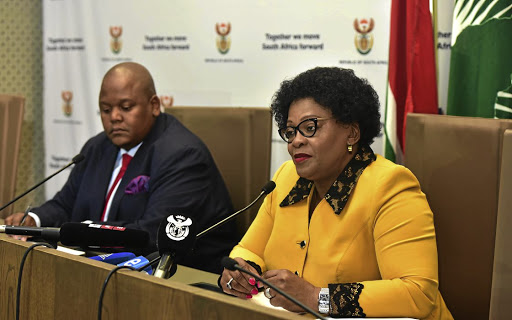 In her statement, Mokonyane said that austerity should be a "last resort and an integral part of a holistic, well-formulated and broadly acquired turnaround plan aimed at steering the SABC towards future financial sustainability".

"The SABC is a national asset and as a public broadcaster, its well-being is not the exclusive domain of the board of directors and management, but that of all stakeholders with an interest in its sustainability and that includes the government, labor, the social midfield and the wider public, "Mokonyane said.

The SABC turnaround plan also lacked details on how much the job cuts will save the SABC in the short, medium and long term, she said.

The SABC board has yet to respond to detailed questions about Mokonyane's statement on Tuesday. However, in an earlier weekend response to claims by ANC Secretary-General Ace Magashule that the party had decided "not to allow" that the job reduction continues, SABC spokesman Neo Momodu said: "No person, organization or entity is allowed to interfere with the way in which the SABC board exercises its power in terms of … the Broadcasting Act Any interference would be in violation of the law and a recent judgment of the court to that effect. "

DA MP and communication spokesperson Phumzile Van Damme called on the SABC to publish its reversal strategy. Reports that up to 800 employees are likely to lose their jobs "is heartbreaking".

Van Damme said about Mokonyane's statement: "The minister seems to forget for the sake of convenience that she is not legally allowed to interfere in the SABC's business."

Media Monitoring Africa director William Bird said that the minister seemed to throw fake indications on the SABC board and therefore indirectly interfered. Reducing the head count was a requirement for the Treasury guarantee in 2009, but the SABC had increased staff by 34% in the last five years.