This year, the Cape Town International Public Culture Festival focused on increasing the awareness of the misuse of nature and more specifically distributing messages that fell on the approaching "Day Zero" at home – a marking on the calendar when Cape Town is expected to have too little water and the four million inhabitants will have to collect daily water rations: less than seven gallons (25 liters) for each person.

For quite some time It was expected that Cape Town would be completely without water due to extreme drought. In February of this year, Day Zero was pushed back to July. And then it was relocated to an indefinite date in 2019. The indefinite date seems appropriate given that while the people of Cape Town are making positive efforts to preserve water and fight a disaster, there is still uncertainty about when and how the problem will ever be solved.

Jared Aufrichtig, an artist from Los Angeles, this year was one of 35 artists at the International Public Arts Festival whose work helps the festival collect money and awareness to support Cape Town's fight against Day Zero. He created a public mural called "Water Into Gold" and leads workshops for youth development, painting more murals with children from Cape Town.

"A change in behavior begins fundamentally in the mind," says the IPAF about the festival and their salt River School. "A small step-by-step change in the way we think of a valid change in our behavior."

The sentiment is quite simple. Consciousness through art can influence people to make small, positive changes to get Cape Town out of their disastrous drought. It does not place water in reservoirs, but it can help keep South Africans focused on the changes they have to make: cars are not washed, sidewalks are not sprayed, showers are kept for less than two minutes, and so on . All conservation efforts that have continued on that day will go further and further.

IPAF & # 39; s Salt River tours give visitors a history of the neighborhood and guided tours of the murals of 70 different artists from around the world. Then you learn a bit about the technique of each artist and the story behind their murals, just like Jared's, followed by a workshop and a personal encounter with the artist. All income from the tours are then used to help children in the community through arts education and create more awareness for the residents of Cape Town and their mission to ward off Day Zero. 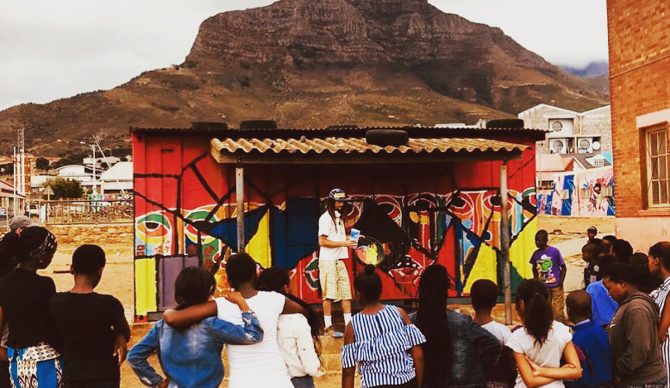 Artist Jared Aufrichtig gives one of his workshops on the youth of Cape Town.