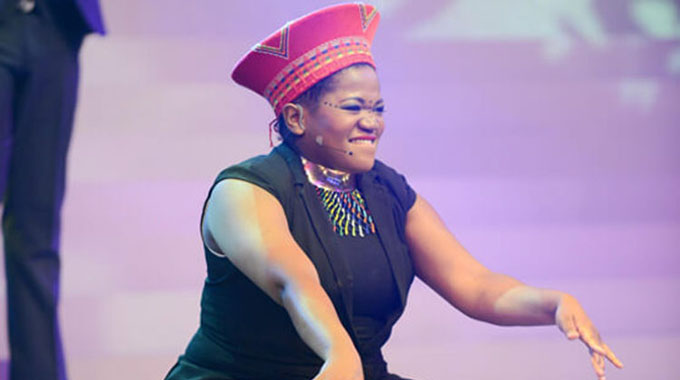 Doctor Correspondent
The South African singer Busiswa is scheduled to perform in Zimbabwe with a large number of local artists on a show that will be a mixed bag of music.

She is on stage at Alexandra Sports Club on 8 September and local artists on the show are Winky D, Andy Muridzo and Mathias Mhere.

The musician, who is also a good poet, is expected to get excited with her hits. She is known for her great stage presence and she will take local music lovers on a fun trip.

It will be a family affair since the event starts at 9 a.m. to give parents the opportunity to have fun with their children before they go back to school.

Busiswa has gained regional appeal because of her great talent.

According to her online profile, Busiswa got public recognition in a function on DJ Zintle Song "My Name Is" after she was discovered by Kalawa Jazmee CEO Oskido.

After the successful collaboration with DJ Zintle she released hits like "Ngoku", "Lahla" and "Gobisiqolo" on the Bhizer EP album.

In December last year she announced the release of her debut album "Highly Flavored", preceded by the single "Midnight Starring" with DJ Maphorisa and Moonchild Sanelly.

The second single from the album was "Bazonela". During her career, Busiswa received many awards and she will come to Harare with confidence based on her tremendous achievements.

Sharing the stage with Winky D, Muridzo and Mhere will also introduce her to fans of different music tastes.

Winky D will represent the dancehall family, although his music goes beyond the traditional listening experience of Zimdancehall and includes adult followers who like his deep lyrics.

Currently, his collaboration with Vabati VaJehovah with the title "Ngirozi" is the most popular tune from his latest release and he does wonders during live shows.

Muridzo will bring the traditional flair with his mbira vibes and he will probably have a good day on stage. His group has done good choreographies during their shows.

Mhere comes to the gospel music family. He has a number of hits that many will send to the dance floor.

Show organizers said they will have a fun family-friendly day.

"The event starts in the morning and it will include a number of activities, we want families to enjoy and have fun together, there will be lots of fun games to cheer up in. We are convinced that the show will get people out. all layers of the population will be thrilled, because it will be a mix of genres, we encourage people to come in their numbers and have fun, "the organizers remarked.