They discover a new kind of dinosaur in Neuquén: it was herbivorous and had huge spines in its neck – 04/02/2019

argentina February 4, 2019 ARGENTINA Comments Off on They discover a new kind of dinosaur in Neuquén: it was herbivorous and had huge spines in its neck – 04/02/2019 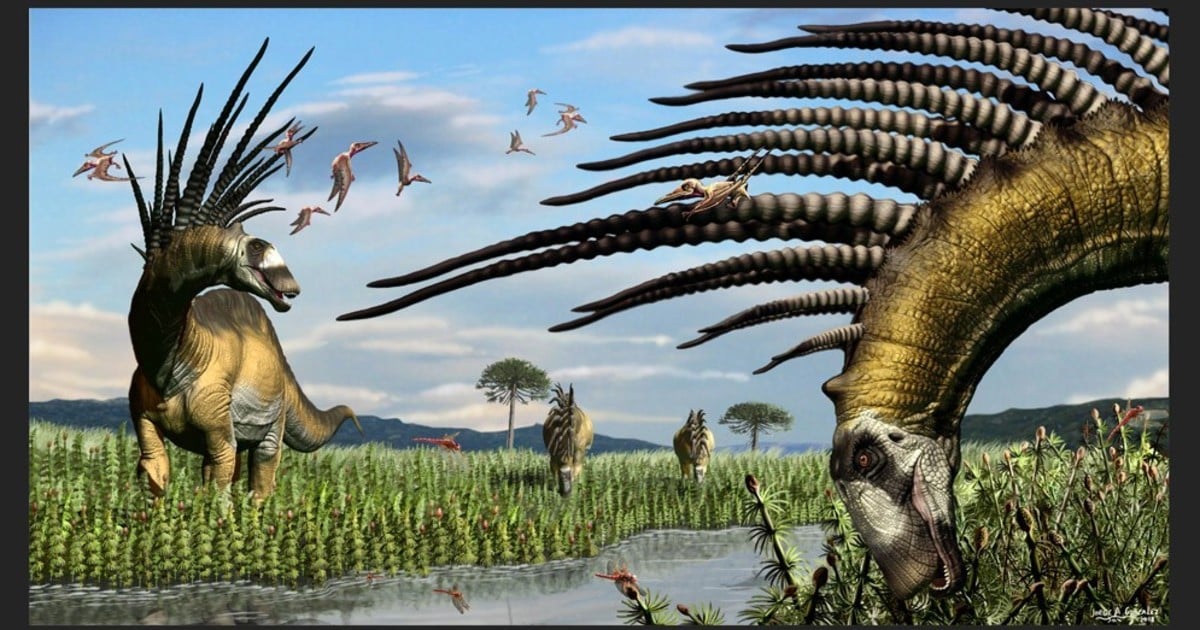 The first thing that Pablo Gallina – paleontologist assistant researcher of CONICET – found two teeth sticking out of a rock in the middle of Neuquén Patagonia. From that moment on, he believed that what came from behind was something important, so he asked other scientists to rush the extraction and cleaning process. His premonition was true: it was a new species of herbivorous dinosaur, with huge spines that were born from his neck.

"It's similar to making a goal like what Maradona did to the English in 1986," says Pablo, as an example of what the discovery is, still excited because Monday's Scientific Reports magazine is one of the most prestigious in the world. world. news for the natural sciences – publishes the report on this finding.

They found a new kind of dinosaur in Neuquén: the pronuspinax of the Bajadasaurus. Reconstruction of the neck; the bones were found in white. (Courtesy Conicet)

What they have found is actually a new kind of dinosaur. It was called as Bajadasaurus pronuspinax. The proposed name refers to its different characteristics: dropin relation to the place of discovery, Bajada Colorada; saurus, in Greek, means "lizard"; Pronusin Latin means "to lean forward"; spinax, in Greek means "thorn". The name in Castilian would then be "lizard of descent with the thorns forward".

So also the Bajadasaurus according to the fossils that they found in Neuquén. Illustration: Jorge A. González.

This animal belonged to the family of sauropods, which have long necked herbivores and developed different strategies for defending against their predators. While in some the combination of large size and rapid growth placed them safely, others developed creative strategies such as lashes, armored skin or bones at the tip of the tail. In this case, the Bajadasaurus possessed long, pointed spines on the neck and back.

One of the thorns found by paleontologists.

These animals spent much of their time feeding on earth plants, while the eye sockets near the roof of the skull allowed them to control what was happening in their environment.

In the area where it was found there are rocks of about 140 million years old, belonging to the geological unit known as Bajada Colorada Formation, Neuquén, deposited at a time when, like the Andes mountains did not yet exist, and the Atlantic Ocean began just to be outlined, the Neuquén region It was surrounded by the Pacific Ocean.

Exactly it is in the middle valley of the river Limay, in the north of Patagonia, between the towns of Picún Leufú and Piedra del Águila, where the reddish rocks are exposed to those who go to Bariloche via route 237.

They found a new kind of dinosaur in Neuquén: the pronuspinax of the Bajadasaurus. Remains of the jaw and teeth. (Courtesy Conicet)

"The importance of this study is, among other things, that it allows us to know a bit more about the dinosaurs that lived in the North Patagonia area long before the reign took place during the Upper Cretaceous groups of dinosaurs such as titanosaurus-sauropods or theropods. abelisauroidea Of them yes we know a lot more It is with this objective that since 2010 we have been exploring the area of ​​Bajada Colorada where we find 140 million years ago rocks, "says Gallina, also a researcher at the Azara Foundation and Maimónides University .