After shortcomings in the act of Rodrguez Sa, the K Moyano accuse of playing for Uac 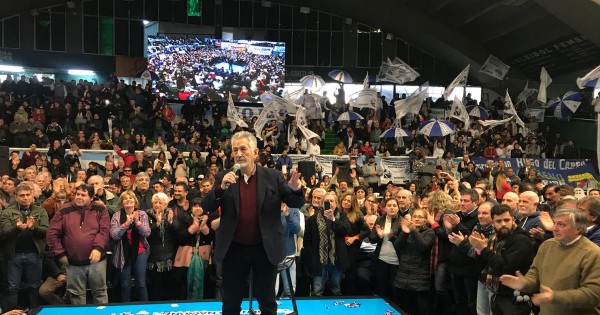 The act organized by Alberto Rodrguez Sa in Ferro in the context of his campaign "Hay 2019" ended in frustration: all intendant of the Buenos Aires PJ were missing and also the truck driver Hugo Moyano, who had confirmed that they were present, so they waited until the end.

"Moyano did not come because he plays for Uac", a source close to Cristina Kirchner in dialogue with LPO analyzed. Beyond the aversion of the absence of the gremialista, the truth is that Kirchnisme believes that the truck driver looks enthusiastically at the flirtation of the governor of San Juan with his final candidacy for the Rosada.

On the same Saturday, hours before the Ferro plenary meeting, Uac held a meeting behind closed doors in the Government House with Facundo Moyano and Felipe Sol, who also invited the head of the national PJ, Jos Luis Gioja.

LPO continues, in one of his latest interviews Uac criticized Cristina and praised the presidency of Nstor Kirchner a lot, in a sign of Kirchner's approach that becomes clearer with his attempt to make peace with Gioja.

Moreover, the San Juan recently met with the scrum of intenders of the PJ Bonaerense that Martn Insaurralde nominates as a candidate for the governor and everyone is satisfied with what, for the majority, was the first summit with Uac. In fact, no community leader has decided to attend the act of Rodrguez Sa, except for the Kirchner Mario Secco.

In the organization of the law admit this afternoon a "very serious shortcoming" and complained about what they considered a relocation of Gabriel Mariotto: take care of the help of Mximo Kirchner to harass his militants to fill the plenary meeting.

The son of the former president was not there, but he sent his troop: Andrs "Cuervo" Larroque, Mariano Recalde and Axel Kicillof held leading positions at Ferro this afternoon, where Martn Sabbatella, Luis D & # 39; Ela, Sergio Berni and the " Duck "Urribarri.

Also missing was Jorge "Coqui" Capitanich, who was expected to speak before the closure of Rodrguez Sa, and there was no governor. "We appreciate the attempt of companero Gioja to come," said the puntano in his speech, because the president of the national PJ was the only one who had an excuse: he lost the flight because he was left behind in his meeting with Uac.