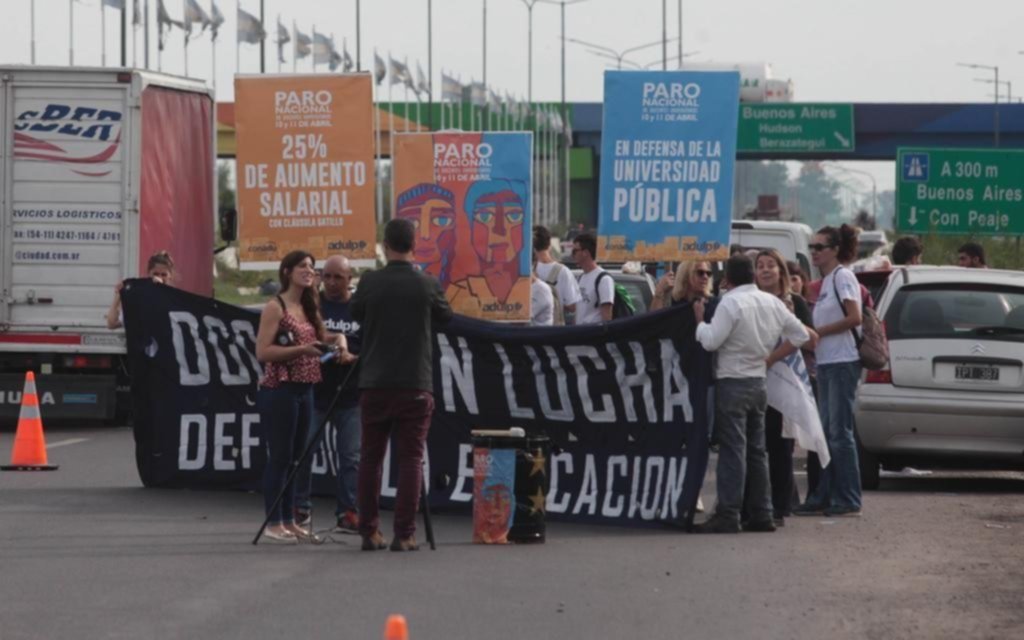 It will also affect various faculties of the home of high studies that started last semester last Tuesday. They reject the salary offer of the national government

The professors of the university are returning to carry out an extensive unemployment of today and until next Friday to improve wages. In turn, they declared insufficient to award an increase of 5.8 percent, announced by the Ministry of Education of the Nation. In this context, the schools of the National University of La Plata have another week without activity. In the faculties, the panorama is different because according to each academic unit a different compliance is expected.

In our city, the Association of Teachers of the National University of La Plata (ADULP) is preparing a mobilization and symbolic embrace to the Rectorship of the UNLP for tomorrow at 11 am.

ADULP will, together with the Federation of University Students (FULP) and the Association of Non-Teachers (ATULP), carry out a mobilization and symbolic embrace of the Rectorate in "defense of the right to public university, free and inclusive." The day chosen for this important joint activity is announced by the union next Wednesday, August 22, starting at 11 ".

"In the context of the crisis of the national universities, with the budgetary suspension established by the national government, the house of high studies of La Plata is not the exception." In the face of this, the trade unions of teachers, non-teachers and students agreed to a degree of unified power to demonstrate against the neoliberal policies that aim to close people to the doors of higher education.

From the Ministry of Education of the Nation, announced yesterday that "in August the university professors will receive an advance because of future increases of 5.8 percent".

This month, the Ministry of Education of the Nation grants university lecturers a 5.8 percent advance as a result of future increases, which could be agreed in the Salary negotiation table that is carried out with this sector, indicated in an official statement.

The national educational portfolio also showed that "a week ago the trade unions of university lecturers had proposed an increase of 5.8 percent in August, which, added to the 5 awarded in May, was 10.8 percent. inflation of the period March – June of four months, where it was proposed to the groups to continue negotiations without measures in force that would make the normal class dictation impossible, "they added in the Ministry of National Education.

They also add that "despite the announcements of unemployment, the national government took the decision with the aim of maintaining the purchasing power of salaries, because with this increase and that granted in the month of May the inflation of the four-month period of March – June The salary negotiations with the university teachers cover the period March – March, and last year the trigger clause of 2.77% was applied ".

From CONADU replied that "the Ministry of Education has just informed, granting a unilateral increase of 5.8%" on the basis of future agreements "which was already declared inadequate in the parity of Monday, August 13, because it consolidates the loss of the purchasing power of teachers and does not exceed the ceiling of 15% ".

Carlos De Feo Secretary-General of CONADU said: "The government must give an effective answer, not just on the pay situation but also on the budget crisis of the university, the non-start of the lessons, the hugs at the universities and the many examples of struggle are the rise of the profound malaise of the teachers and the university community.Therefore we go to unemployment and the university marches on 30 August in defense of the workers and the right to the public university, because with these policies this danger runs. " .

They also added that "the ministry's extravagant proposal with a lot of fanfare is that teachers accept that they only collect in September, an increase equal to the inflation that has already penalized us between March and June. under inflation that the government continues to deepen ".

For university teachers' unions, this unilateral decision was taken in view of the overwhelming plan of struggle of university professors, which forced the government to give up positions to satisfy the dissatisfaction that has arisen in the homes of higher education ".

NATIONAL FIGHTING PLAN AND IN SILVER

In this context, CONADU ratified the national university strike from August 21 to 24, in a call for a joint agreement that includes a substantial salary increase with a trigger clause and a higher university budget. The degree of strength will be the introduction to the University Navy of 30 August in defense of the public university and the teaching salary.

The CONADU battle plan continues with the following action plan:

From tomorrow and until next Friday, week of unemployment.

Tomorrow mobilizations and hugs at the universities with non-teaching workers and students. In La Plata it will take place from 11 in 7 between 47 and 48.

Thursday, August 23. Street interventions in defense of the public university.

On Friday 24 August there will be a plenary meeting of general secretaries.

The University Navy will be announced at the Pizzurno Palace on 30 August, head office of the Ministry of Education of the Nation, through a salary increase and a larger budget.

The requirements of CONADU include, among other things, a salary increase of 30%.

the inclusion of an inflation clause.

In our city the interruption of interruption will be felt in the National Colleges, Liceo Víctor Mercante, the Bachelor of Fine Arts, and the school Anexa, where they recently had six days of work stoppage, from 6 to 13 August.

In our city, the lessons were resumed on Tuesday, August 14 through Friday, 17, but now they return to include the fighting measures so that the days without activity affecting the school agenda will continue.

The second semester started in several faculties last week and therefore the measures of previous forces had no major impact on university students.

On the other hand, the Ministry of Education of the Nation stated that "the last tranche of the agreement with non-teaching university employees is advanced".

The Ministry of Education of the Nation reached a wage agreement with the Argentine Federation of the Worker of the National Universities (FATUN), the union that groups the non-teaching workers of the houses of study. The same applies to the prepayment of the month of September of the payment of the last 4 percent drive that was planned for November.

per cent This is what the university education associations ask the national government, plus a trigger clause and the raising of the budget items for the public universities of the country. Starting today a new learning strike for four days.

per cent is what the national government offered for the period March, according to sources from the national educational portfolio. It had offered 5 percent in May and another 5.8 percent in August. At the same time, they asked to negotiate without coercive measures.

Days of unemployment there was until August in the colleges of the National University of La Plata. The lessons were resumed on July 30 after the winter break. There were strikes on Thursday 2, Friday 3 and from 6 to 13 August.