argentina October 16, 2018 ARGENTINA, Nation Comments Off on Deputy Roxana Reyes complained that she was threatened with death – 10/16/2018 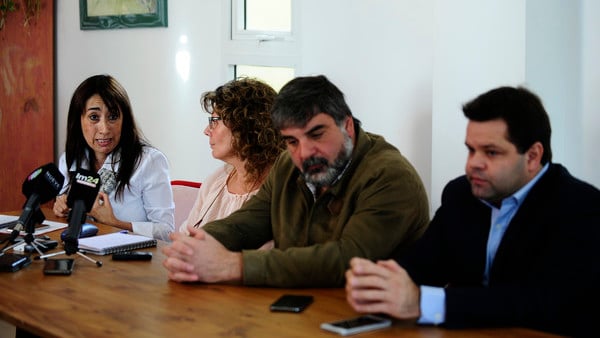 The national delegate Roxana Reyes (UCR) condemned that she was threatened with death.

Among the messages that Reyes received via social networks is a picture with a painted car next to the legend "You are next!"And another where you see different bullets and an inscription that says "They are all for you" (Sic).

The image of the car with the message "You're next!"

In a press release indicated from the block of national representatives of the Radical Civic Union that the lawmaker of Santa Cruz submitted the complaint to the court and informed the Ministry of Security of the intimidating messages.

The deputy Mario Negri and the senator Eduardo Costa, both from the UCR, sent out the messages that Reyes received on Twitter.

"We will not be stopped, we will change this reality, we will continue to fight against the gangsters and the corrupt people, we will not take a step back," said Reyes, who has denounced corruption, money laundering, overpriced prices in the public work and misappropriation of the funds of the Santa Cruz government.

This is very serious. The deputy threatened with death @DipRoxanaReyes in Santa Cruz.
From the interblock let's change we sympathize with her and reject these facts. The violent respond to the critical and powerful voice of Roxana. They will not stop it. https://t.co/LxuQkyWJij

ROXANA REYES receives death threats.
They sent messages with intimidation. We make the complaints. We will not stop our efforts to change Santa Cruz. We will continue to work to transform our province and end the mafia and corruption pic.twitter.com/04j1dj8JaB

The legislator said that the intimidation she received attempts to stop the work she did, but stressed that they will not understand.

At the beginning of the year Reyes condemned that he was the victim of a strange act of insecurity in his home.

A 35-year-old man had come into his house to break a window and do damage and then used the deputy's personal Facebook account to post messages against President Mauricio Macri, Costa and in favor of Gov. Alicia Kirchner.