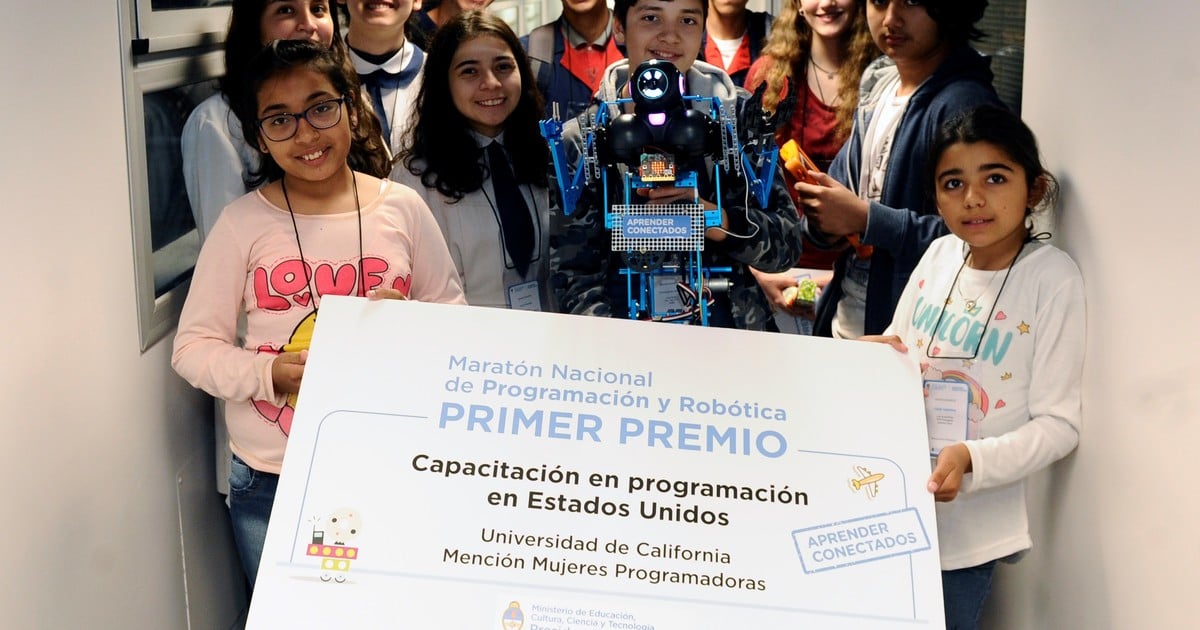 The proposal is additional didactic ecological and hopeful in the case of students between 10 and 17 years old. What is it? in program and develop video games aimed at solving environmental challenges. This was the slogan of the First National Marathon of Programming and Robotics, which included 7,500 pupils from public primary and secondary schools across the country who participated in groups of three.

The boys, between 10 and 17 years old, from public schools in different cities, proud of their awards. Photo: Juan Manuel Foglia.

The competition, unique in its kind in Latin America, and which took place in Buenos Aires, is part of the Connected Learning Plan, an initiative of the Ministry of Education of the Nation, that had the special feature it was not necessary for students to have inside information; on the contrary, it was sought to promote learning programming not as an acquaintance for a small group, but thinking about something formative and inclusive.

It started in May and ended on Tuesday and won the winners to the Obispo Zapata secondary schools in San Juan; Mariquita Sánchez de Thompson, from the federal capital; Normal Superior Manuel Belgrano, from Santiago del Estero, it is exclusively integrated by women. All became creditors ofand a scholarship at the University of California – one week in November – to continue training. Bragado elementary school No. 6 was awarded a robot material for her part.

In Pink House. President Mauricio Macri received them in the Hall of Scientists and congratulated them on the effort.

"We enjoyed working with this subject because it's fun and we've learned more about programming and robotics," says Manuela Marqueti (16), a member of the ladies' team at the Santiago school. "I lived one of the best moments of my life", joins San Juan Francisco Ramos (15)." It stimulated me and It opened many ideas about what I would like to do tomorrow", slide slides" Linares, the resident of Buenos Aires (16). " I think this kind of initiative helps organize and work together as a team, "added Jonathan Carrillo, also from Capital. Yes, it is important to be aware of the environment ", says with shyness his Selena Salvatierra (10), from Bragado, enthusiastically, convinced the boys that" such competitions stimulate, entertain and they open their heads when they think about how they can take care of the planet, and enable us to learn digital skills, what the future is. "

The Marathon included the construction of a site where all participants had access to training material for Scratch – application of visual programming – and programming language Python – and where they were completing the challenges of the game. Through the platform of the competition, the participants had access to various sources for consultation, such as manuals, tutorials, glossaries and examples of good working methods for programming. And there were slogans according to the different levels, but always related to the recycling of waste.

Here they show the certificate that qualifies them for the California Fair, which will be held in November. Photo: Juan Manuel Foglia

María Florencia Ripani, National Director of Educational Innovation, attending the meeting with the winners, stresses that "this type of competition is generating spaces for participation in the construction of emerging knowledgesuch as programming and robotics, based on the genuine interest and enthusiasm of girls, boys and young people, "she says, and why is this marathon useful?" It is useful to guide these lessons on the basis of a problem of concrete reality. , in addition to the possibility for students to become makers of something so important in their cultural consumption, such as video games".

Camila Luna, the most talkative of the student group, says that "these programming exercises they help to think better and organize yourself in a certain way. "For Leandro Olmos (15), from Caucete (San Juan)," the most important thing is to have learned a topic that I had no idea and not only did I grow in knowledge, but it also seems to me a very interesting activity. "Little Valentina Clutet (11) emphasizes that" I have learned to play and never get bored. "