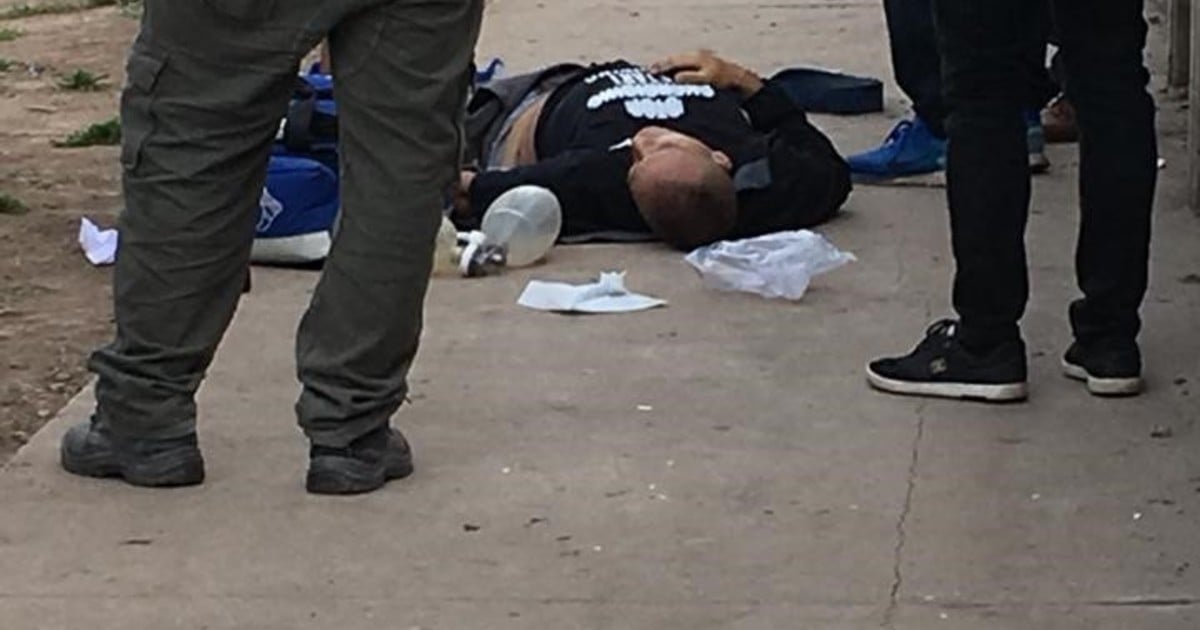 The attack was brutal, at a certain moment. Six shots, of a flurry of 20, touched the thorax, abdomen and legs of a businessman who witnessed the case in which they condemned Mario Segovia, the so-called "The King of Ephedrine".

The victim was Andrés Lamboy (45), who collapsed in front of the school where his children were present, in the western zone of Rosario.

The businessman Andrés Lamboy, after being attacked by gunshots. He was interned, in a reserved state.

Two people in a car with tinted windows they attacked him quickly and directlyto make clear what the goal was that they were looking for.

Lamboy entered the hospital clearly and stably. He was operated on and his state was reserved, according to the doctors of the emergency hospital Clemente Alvarez (Heca).

The police are working on the scene where they attacked a businessman in Rosario, (Juan José García)

Lamboy is a businessman who focuses on real estate. In the past he was involved as a witness in the case for which Mario Segovia, the so-called "King of Ephedrine", was sentenced to nine years in prison for smuggling that drug to Mexico.

The researchers have not given any hypotheses at the moment about the reasons for the Lamboy attack.

The businessman arrived at the exclusive Colegio San Bartolomé to drop off his children, around 8 April this Tuesday. Then he walked to the grounds of the rugby club Los Caranchos for breakfast at the bar. When he left, around 9, he was attacked.

The door of the Rosario school where they shot the businessman who declared against Segovia. (Juan José García)

He was about to get into his truck, a black Dodge Ram, when a car came at the same level and from inside he was shot. The aggressors would be at least two and the impact on the campus wall reflects the bestiality of the attack: some crossed the wall and entered the sports field.

Because of the power of the recordings, the researchers estimated that they could use a .45 caliber weapon. Fortunately, no student was hit by bullets, but some people who did physical activity in the rugby club noticed the attack.

Mario Segovia, known
as "The King of Ephedrine" in the hearing room of Federal Court 4 of San Martin, where he was tried.

"We have heard about 20 recordings," they said. When they went out to see what was going on, they found Lamboy next to his truck. "We did not understand anything that happened"Has told the occasional witnesses.

The school authorities avoided speaking. A shocked father accepted: "The feeling is great, I do not know if I want to go back".

Although initially it appeared that the victim got nine shots, the doctors counted eventually Six impacts on the legs, thorax and abdominal area. Although the picture is serious, doctors noticed that he was entering the hospital sta- tion, so they concluded that blood loss was not so important to decompensate. The next hours will be the key.

Witness to the king

The surname Lamboy was recorded in the case against Mario Segovia after the statement only as witness for holding the position of director of South American Docks S.A., a fiscal warehouse of Barracas where 523 kilos of ephedrine was stored and destined to be shipped to Mexico.

Mario Segovia, "the king of Ephedrine"

According to the ruling in which Segovia was convicted, the company committed the contraband of substances "which by their nature, quantity or characteristics may affect public health (ephedrine hydrochloride or pseudoephedrine)". The load was detected in sugar packets brand "M & K".

At the Lamboy lawsuit he stated that he was director of South American Docks S.A. until 2007, when he retired from his wife, the daughter of Rubén Galvarini, who chaired the tax depot and was sentenced to 7 years in prison.

The businessman indicated that as director he appeared "on paper only", but that he never worked for South American ports. "I limited myself to signing the blackboard minutes", he said.

The ephedrine, which was destined for Mexico, was elaborated in a fifth by engineer Maschwitz.

In his statement he admitted that he had met Segovia. He called it "Nicolás Mario"although his name is Mario Roberto Segovia. About the so-called "King of Ephedrine" said he worked in the tax warehouse until he fought with Galvarini.