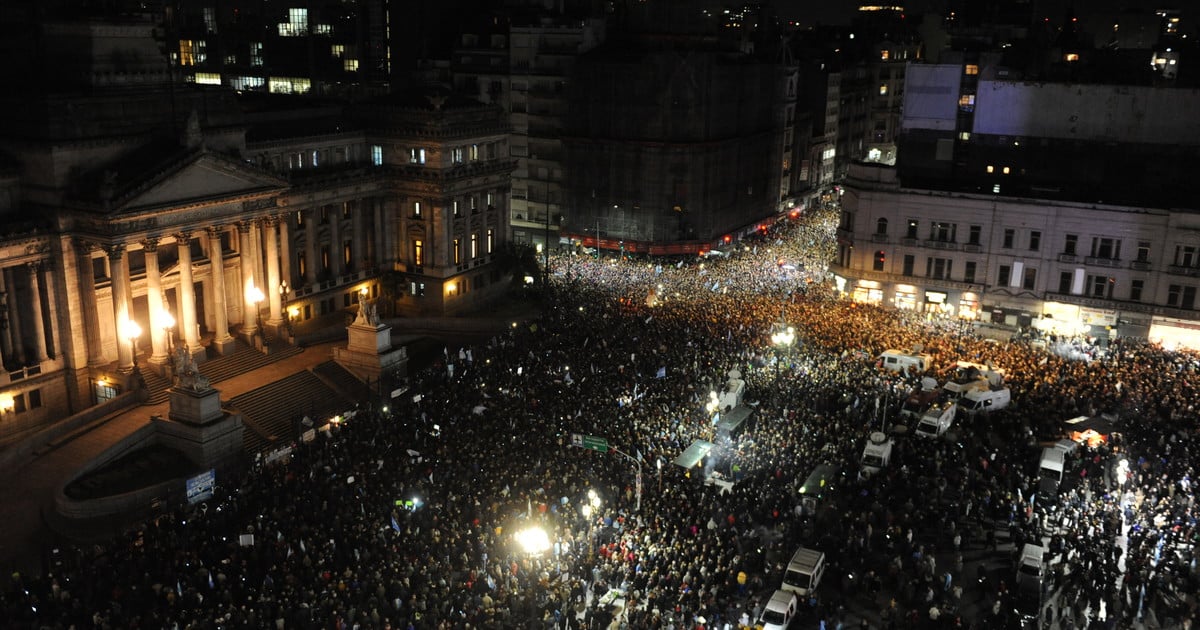 The previous session to approve the raid on the houses of Cristina Kirchner had a huge 21A. On an icy night, thousands of people gathered for the Congress to not only ask for permission for the judicial measure: with slogans against the corruption of the long Kirchner decade they also asked for the release of the ex-president, the adoption of the law. from extinction of domain and that "Return the stolen" during the K era.

The rally was triggered by social networks after the second failed attempt to tackle the raids in the Senate last Wednesday. It has come out of it militants and officials at the head of Media, Hernán Lombardi. But the confluence, although it had a profile of clear rejection of Peronism in general and of support to the current government, goes beyond every expression of a party. With Argentine flags and banners, people put the accent on the fight against corruption. For that reason it went even further than what is in debate, when it demanded the deposition of Cristina.

In the political struggle of recent years, this 21A, although with less volume, was included in the line of the massive protests that took place on 8 November 2012 and 18 April 2013 in the rejection of the former president's intentions of reforming the Constitution to perpetuate itself, a plan that was buried with its election defeat that year.

The distinguishing feature was the familiarity of the people more than 50 years old. However, a young nucleus opened up the space to crowd for the bars of the Congress Palace.

When Alfredo Casero arrived, he received a sector from the Plaza that sang it "We want to flan", the new hit that went viral based on the sense the comedian used in a recent report to question the legacy of K. The actor walked with the parliamentary deputy Mariana Zuvic and photographed with the national legislators of PRO Pablo Torello and Cornelia Schmidt -Liermann.

The slogans demanded "Give back the stolen", "the extinction of the domain already", "impunity never again" and "prison for the queen of the mafia", in reference to the former president.

"Desafuero, desafuero!" It was one of the most common chants at night. There were others with insults to Miguel Pichetto, the head of the Peronist senators, who is responsible for "protecting" the former president and presumably blocking the approval of the raids on the grounds.

At the same time there were mass demonstrations dozens of cities in the interior, among others Cordoba, Rosario, La Plata, Mendoza and Salta. The conveners estimated about 80,000 people in Congress, and about 20,000 in Rosario and Córdoba, according to the calls they received there. Social networks, especially Twitter, were very active and reflected much of the movement of the day.

Before the conference we saw the delegates from Cambiemos Graciela Ocaña being satisfied selfies with a group of pensioners, Waldo Wolff, Jorge Enríquez, Lucas Inccico, Sergio Wisky, Javier Pretto and Fernando Iglesias. The provincial vice-president Carolina Píparo with María Luján Rey, mother of Lucas and an emblematic face of the family members of the tragedy of the TBA in the station Once.

"We are all the same, we want the deposition and the extinction, to return the stolen silver"said Clarín Gloria and Teresa, both retired from the former Entel and the neighbors of Congress. Isa, arriving from Núñez and wrapped in an Argentinian flag, defined that "the most important thing is to end impunity." It does not communicate well what affects stolen silver, schools and hospitals that have been made possible. "

The idea of ​​the conveners was to put pressure on the Senate that will debate the problems today, in a climate of tension in Peronism. As the concentration grew, the demonstrators of the letter sent by the ex-president taught the raids on their homes.

"They were not penguins, they were vultures", a sign hung on the bars of the congress, in an allusion to the Kirchners. The cotillion was not absent, like a mannequin with a long-haired wig – intrusive for the ex-president-dressed with pollera, top and striped hat, as the prisoners.