José López: the & # 39; guest of honor & # 39; who left behind incomplete and over-invoiced works in his hometown 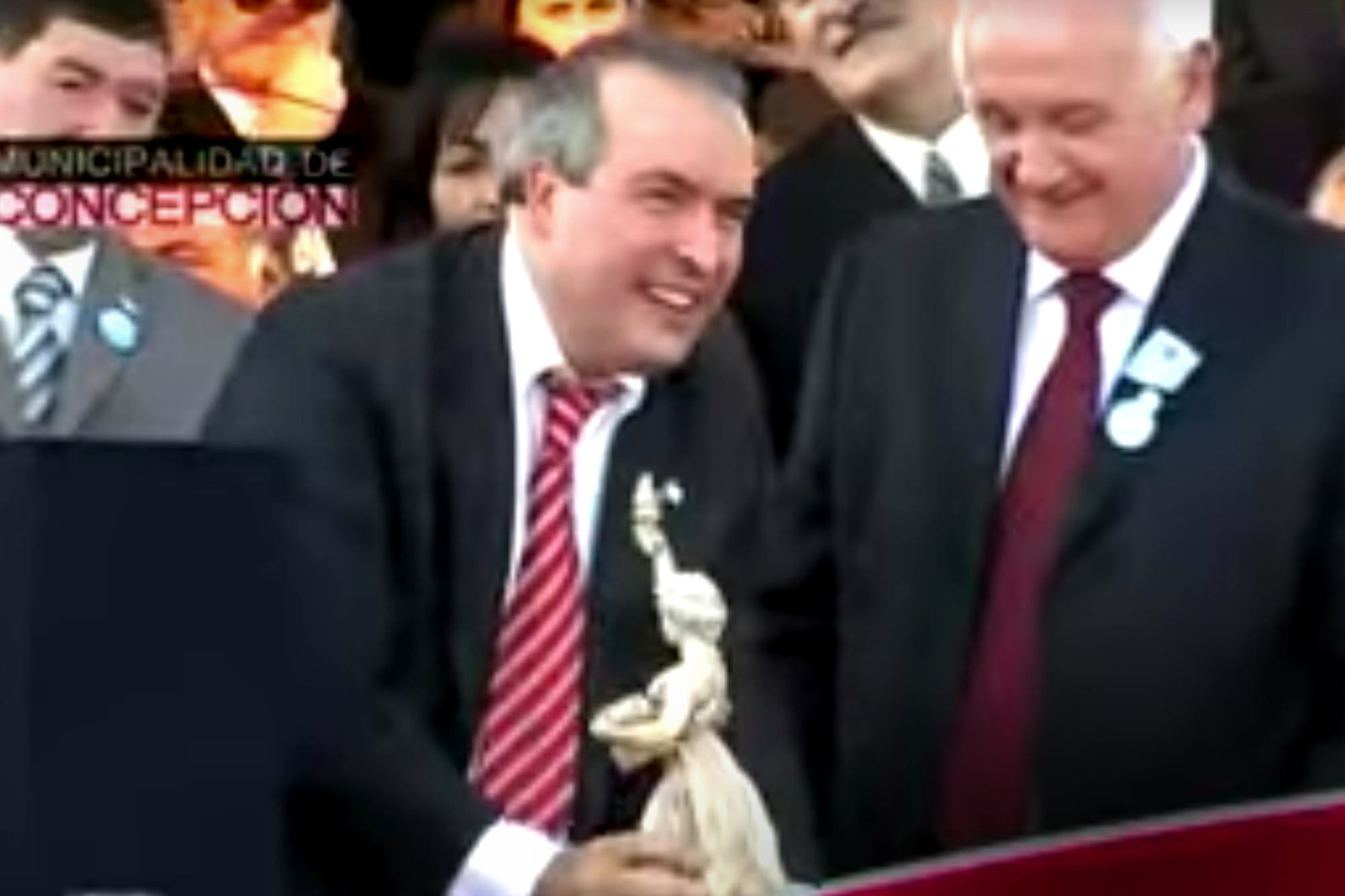 "Declares the guest of honor of the city


view
while being its durability in the same, to the State Secretary for Public Works of the Nation, Ing.


José Francisco López
I wish you a pleasant stay ", reads the first of the five articles of decree 131/10 with the signature of Osvaldo Morelli, ex-intendent of the" pearl of the south "of Tucumán and who was charged with López for the too high prices and falsifications of works certificates for the bus terminal of the city, which just ended three months ago, change of government by.

The date of the decree is no less: it was 9 July 2010, the day in which the greater distinction was received that the town offers 76 kilometers southwest of the provincial capital: "Libertad Prize". It is a replica of the Statue of Liberty on the Plaza Miter in the center of the city and is given to "fellow citizens or institutions that deserve recognition for society and the municipal government, for their excellent skills and virtues in the implementation of individual and collective activities in different areas, "Morelli said in the document.

The story of López, the man who gained world fame when he was discovered infraganti when he tried to hide bags with 9 million dollars in a monastery of General Rodríguez, also left his mark on the land that saw him born and formed before he emigrated to Santa Cruz to make a political career with Néstor Kirchner.

The terminal, which was estimated at 30 million pesos and eventually cost 45, is not the only work of the now & # 39; repentant & # 39; ex-secretary of Public Works who stands in the caucuses of Tucumán without intercession. Why? Who is in charge of the prosecutors in Tucumán is Edgardo Jimenez, the ex-governor's former minister


José Alperovich
, who gave him a key position in the legal system months before he left office.

On July 9, 2010, López and Morelli initiated a part of the new route of National Route 38

The "Yaciretá" from the "Pearl of the South"

Concepción is known as "La Perla del Sur" and is the second important city in the province. It has its own courts and is the head of the diocese responsible for the south of Tucumán. Despite being the largest and most densely populated municipality, it lacked a bus station according to its needs.

As early as March 2004, in the first of three consecutive mandates at the head of


view
Morelli said it would start with the process of choosing the place where the terminal could be upgraded. A year later, for the council members, it indicated that the place had been chosen and that it was put out to present ideas on how the terminal should be. There were 36 proposals and after the winner was known, the mayor reported that two million pesos (655 thousand dollars for the change of that year) would be used to carry out the first phase of the "Passenger Transfer Station for the city of Concepción" . .

Everything came to a halt when entrepreneurs seemed prepared to pay for the construction when they received the concession from the terminal for 30 years. This did not succeed and in 2008 the 2 million pesos announced in 2005 were recently released (576,368.87 dollars at the exchange rate of 2008).

Standing on the beach, currently used by the groups arriving at the terminal which was inaugurated a few months ago, Lopez said: "The terminal is the visible face of a city and Concepción will have it in this work in which we undertake to to conclude as quickly as possible. "In addition, the early inauguration of the" urban crossing "was pointed out, which would link the national route 38 to the provincial 65 and tripled the price in the five years that delayed construction.

Next to him, Morelli, who was a professor at the technical secondary school in López, added: "Fortunately Concepción crystallizes a desire, now this will be possible with the help of the nation." Also present at the event, Alperovich added that both with the "urban crossing" and with the Concepcion terminal "the Pearl of the South" would be.

One month after the signature, as stated in the complaint submitted by the current mayor Roberto Sánchez (Cambiemos), Morelli was referred to as "technically responsible for the work" his son, also architect, Franco Morelli. This young professional was the one who signed the certificates of progress of the work, who never existed, but also as one of the owners of one of the cooperatives that the municipality hired for a part of the works in the terminal. to feed. That is, Morelli (son) had to check and certify himself.

In 2015, when nine months had passed since phase 1 of the work had to be completed and more than 15 million pesos had been drawn, the money was asked for the second and last part:
Morelli spent his last months at the head of the congregation and, faced with the legal impossibility of being re-elected, postulated his son Franco, who controlled and built a portion of the work to be his successor.

Eight weeks before the elections in Tucumán and three months after a new visit from the "Guest of Honor", who also wanted to rule over his birth province, the Secretariat of Public Works of the nation issued resolution 1044, dated 29 June, which states that the transfer of $ 15,204,232.02 ($ 1,673,553.33 at the official exchange rate for the day) was approved. The fate of these funds is still a mystery to this day.

With the change of government, after the tight defeat of Morelli's son, Sánchez declared that the certificates had been forged and, for example, the sanitary appliances and faucets that had been reported as purchased were not. Neither was part of the certified metal carpentry and a surcharge of four prices was discovered in the "access diver" of 100m2 which costs less than 200 thousand pesos on the market and which was billed at 800 thousand.

But the most serious and visible would come with the newest certificate of progress from that first 15 million. According to the complaint and the documents endorsed by LA NACIÓN, the fence and the 1301 meter metal fence, which paid $ 1,055,111, were never made. But he accused.

The urban intersection that was paid four times more

As published by LA NACION on 20 September 2016, the National Highway Authority (DVN), which depended on López, signed an agreement with Morelli to finance the Urban Crossing in September 2009.

The work consisted of a cross between the renewed national route 38 and the 65 provincial, through which one enters the bus station. In detail, the work consisted of an access road to the city with six lanes on the 38 and a roundabout to articulate traffic with the 65. The work was estimated at $ 44.8 million and was awarded to the company Green SA. The completion was scheduled for October 2012.

However, the work was not completed at Morelli's exit and was partially turned on. With the change of authorities, Green SA. demanded a millionaire debt: $ 33.8 million for late payments and interest. He also asked for a letter document that would be converted into $ 4.5 million for the final payment of the work. The final number: $ 182 million.

The homage of the "Guest" to the mayor

With the perfect defeat and a few days before Sanchez took office, José López returned to his birthplace Concepción and paid tribute to his ex-professor and departing mayor. "This is a recognition for the mayor of this city, for his work developed in the period 2003-2015 that made the largest investment in public works in Tucumán possible," said the engineer on the morning of October 3, 2015.

"Here was the most important investment in the history of the province, from the Ministry of Public Works.
We're talking about $ 3500 million, and that's because there's a political project, not magic. This is a simple but just homage to a great, official and better person, "said the man who would be discovered eight months later as he threw millionaire bags in a General Rodriguez convent.

Morelli did not fall behind and thanked him: "Since the beginning of this political project, we've been trying to include neighbors from the periphery, who speak of a generous inclusion policy to help those who have less."

"The most important thing is to understand that the national government is everywhere, no one is excluded in terms of working and in the social field, it was a great job for the most humble people." I neglected the center of the city a bit, but I understood that the neighborhoods should have priority, no governor can do anything here, but there would be no more intenders, luckily this story goes on, I hope it's good , and certainly with Daniel Scioli we will continue to grow, "said Morelli, it was 22 days before Kirchnisme lost the first round in the hands of the Macrismo and 53 for the ballot box that would lead to the arrival of Change to power.