Like in Ecuador, they will now remove a Kirchner bust from the Plaza de Morón 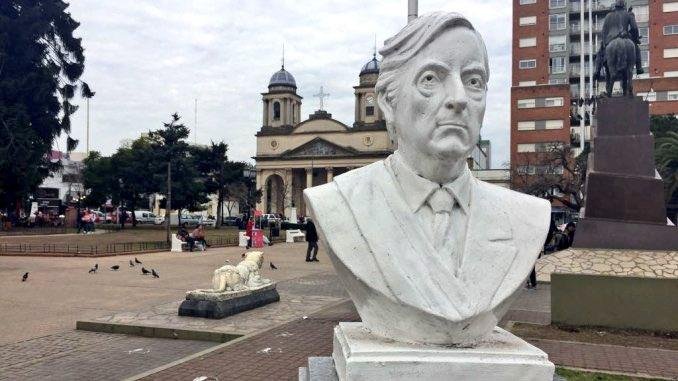 It was approved by the local Deliberative Council after a tough discussion. For Cambiemos it is a symbol of corruption & # 39;

Amidst the progress of the judicial investigation into the collection of bribes to employers for the granting of works during the Kirchner period, the deliberative council of Morón yesterday decided by majority to replace the bust of former president Néstor Kirchner, who was at the central square, to be removed from that district.

The decision was passed after a strong debate in the Council, with crosses between ediles de Cambiemos and Citizenship. And in the context of a wave of affairs in different parts of the country and even in Latin America, the removal of images of the former president who died in 2010.

"The Plaza de Morón will no longer pay tribute to corruption, and our Deliberative Council has agreed to the removal of the bust of former President Néstor Kirchner," Ramón Tagfliaferro's martial mayor, Ramiro Tagfliaferro, posted on his Twitter account.

The bust that is now being removed is located in Plaza San Martín, the most important one in the neighborhood. It was inaugurated after the death of Santa Cruz by the former mayor Kirchner of that municipality of Martín Sabbatella, whose party, Nuevo Encuentro, ruled Morón for sixteen years.

In the session yesterday in the deliberative council of that district, Cambiemos succeeded in imposing the number and approving the ordinance to remove the bust. The project was rejected by all opponents, from the Ciuadadana unit to the GEN, passed by the PJ and the Front Renovador, while a mayor abstained.

On the basis of his initiative, the Cambiemos City Councilors said that "Kirchner is on his way to become a symbol of obscene corruption" adding that "he was the most corrupt president we had". "Moron must respect honesty, must have symbols in its public spaces that remind him of the way forward, in his main square should not have the embodiment of corruption and the use of the state for personal enrichment", says the foundations of the approved initiative.

The project was treated yesterday in an extensive session that took place amidst a tense climate, with the Deliberative Council fenced and strong presence of security in the room.

After the session, the opposition condemned that it did not comply with the current rules requiring a public hearing and accused Cambienmos of abusing its "automatic majority". "We are saddened by this indignation about democracy," said the municipal councilor of the civil unit Hernán Sabbatella.

A week ago, a bust of Néstor Kirchner by the Ecuadorian authorities became a symbol of corruption & # 39; deleted. The monument was installed in the "Plaza Argentina", in Quito, and was donated in 2013 by the Argentine government. Yesterday it was transcended. The bust was kept in a shed and replaced with a pot.