Macri announces changes to come out of the maze

Sunday, far from rest or liturgy, was one of the most intense days for the government of Mauricio Macri, who has been experiencing the worst crisis since the beginning of his tenure. President Mauricio Macri was secluded at his cabinet and the political table of change at the Quinta de Olivos, where meetings took place throughout the weekend. From two names, leaks over transformations of ministries in secretariats and exceeds possible deviations, the executive power provided official confirmations: but there will undoubtedly be several changes, and will be announced today in the morning, on a very intense Monday.

The green door of Olivos opened and closed ten times yesterday before getting in and out of dozens of cars with polarized cars. Ministers, Cambiemos governors, legislators and political leaders of the ruling party were traveling inside. The versions of what was defined in the interior of the presidential Quinta, which during the course of the day were allowed to transcend in the same series of government deputies in the crazy discussions, happened and varied throughout the day.

First, the most decisive decisions: the power of the chief of staff, Marcos Peña, will at least be symbolically limited. The vice-leaders of the cabinet, Mario Quintana and Gustavo Lopetegui – who were on the fifth day in the morning – left their position at Macri's decision. It did not reach with the support of Elisa Carrió (see separate). However, go further in the Executive: Lopeteguí was offered to continue as adviser to the president at Casa Rosada; at Quintana, as the coordinator of private companies in which the national state has actions.

The other firm decision is a plan to reduce ministries and to transform them into secretariats of other ministries. However, there was no official confirmation of the number and between 8 and 13 ministries. The main objectives: environment, culture, energy, agro-industry, production, transport, tourism and science and technology, which would accelerate the departure of the government of Minister Luis Barañao. The rumor that Labor could merge and remain under the production line awoke the alarms in the CGT (see separate).

He also shook the possibility that Defense was confiscated by Security, but other versions indicated that the radical Ernesto Sanz could take the lead over Defense. The co-founder of Cambiemos came together with Macri yesterday afternoon with the Radicals of Congress, Mario Negri, Angel Rozas and Luis Naidenoff, and the governors Alfredo Cornejo (Mendoza), Gerardo Morales (Jujuy) and Gustavo Valdés (Corrientes). The political wing

The one who will leave his position is the Minister of Foreign Relations, Gabriel Faurie. The president offered the Ministry of Foreign Affairs his former finance and finance minister Alfonso Prat Gay. But some voices within the government have not excluded his return to the Treasury.

The current Minister of Finance, Nicolas Dujovne, will for the time being remain at the forefront of the national economy. A name flew over as a threat to continuity: the president would have offered to send Carlos Melconian back to the government – resistance by the cabinet – but that route was quickly cut off.

Dujovne will, despite the weak situation in what leaves him a weekend in which he spoke about his departure, have a lot of work today: it will not only be a Monday of political announcements. Before traveling to Washington to agree on an advance on the loan payments with the IMF, the Minister will make economic announcements. The possible application of deductions on exports, soya beans and other products is covered by the measures.

The announcement will in any case be a political decision to change the paradigm: in the government they already understand that to achieve the goals it will not be achieved by "cutting": more income is needed.

At the moment, two are undisputed: the Minister of the Interior, Rogelio Frigerio, and the Minister for Social Development, Carolina Stanley. Frigerio will continue his ministry despite the rumors about his transition to the Treasury or the Cabinet: he has the immense task of agreeing the 2019 Budget with the Peronist governors and mayors. With Stanley, the president is working on a possible expansion of allocations and social assistance to mitigate the effects of the crisis. The possibility was provided for in the agreement with the IMF. 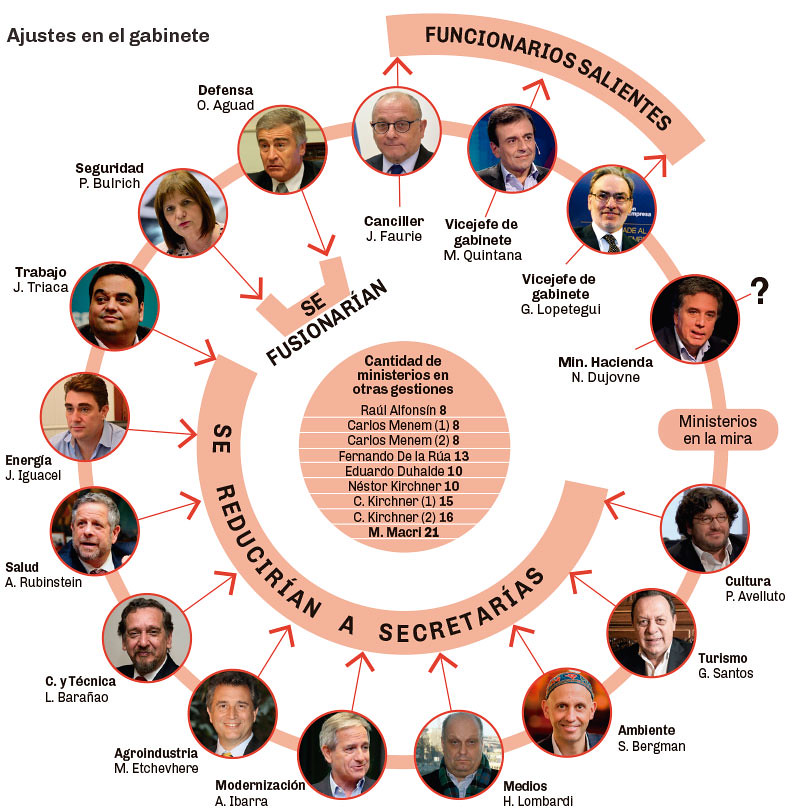 Analysis: get out of the abyss

Economists argue that the crisis is not comparable to that of 2001. The dollars are: deposits at banks are record and increased by more than $ 1500 million since the crisis rose. The analyzes also deny that Argentina is on its way to a standard. Other than that, the IMF is prepared to make payments until the end of Macri's term. The world – and the US – have decided to help.

Even with all these guarantees, Argentina seems determined to keep the fire alive. The signals of the force remain confused. More than a year before the election, enough time for a weak government to demand a broad political agreement to get out of the abyss. If the markets have already expressed the loss of confidence by bringing the dollar to $ 40, what is the social expression of dissatisfaction? The government does not seem aware of this issue.

A name flew over as a threat to the continuity of Dujovne: the president would have offered to send the government back to the economist Carlos Melconian.

Everything indicates that the deputy chiefs of Gabinete Quintana and Lopetegui will finally leave their positions. He is a strong proponent of power for Marcos Peña.

Elisa Carrió plays her own game. The leader of the Civic Coalition, one of the founding partners of Cambiemos, yesterday announced its support to the vice-leaders of the cabinet, Mario Quintana and Gustavo Lopetegui, who described them as & # 39; the best officials & # 39; from the national government. It was while he explicitly mentioned the departure of the cabinet of the two officials.

Carrió spoke on Twitter. In this way, too, the movements in Olivos had previously distanced themselves. "I support the Republic, the president, his team and I do not ask for charges," he said.

In recent months, Carrió has built up a strong relationship with Chief of Staff Marcos Peña, of whom Quintana and Lopetegui are dependent.

I support the Republic, the president, his team and I do not ask for an indictment. pic.twitter.com/1h61211Acq

"They are convinced that the road is fit"

The rumors aroused the alarms in the CGT. Héctor Daer, one of the three secretaries general of the union, yesterday expressed "concern" about the possibility that the Ministry of Labor would become a secretariat and go to a production job, an option that the government could use in the framework of the ministerial restructuring. shuffled that will announce today.

"We are concerned about the abolition of the Ministry of Labor, I hope not, because that would be the absolute lack of care to find the opportunity to create a balance in society," Daer said in radio reports. "They are ideologically convinced that the road is one of adjustment, and this will put millions of Argentinians in poverty," he concluded.