March against death and repression A swamp … 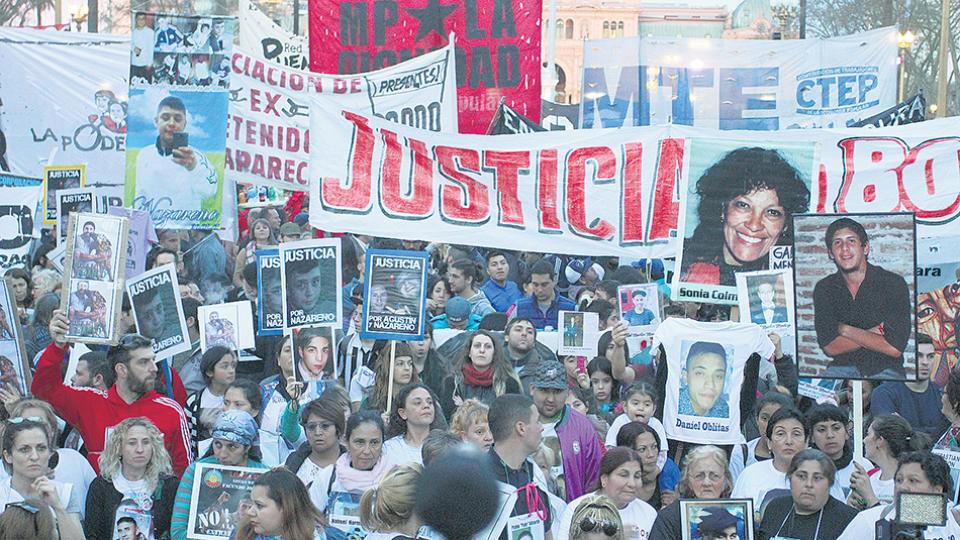 The muscles of the neck tense, she sings while screaming, she jumps as if her body is amused by the rhythm of the drums, but there is no fun, what moves her is the pain. The dance, the energetic saltiqueo is only – and it is not a bit – the way his body translates. Sandra Gómez, the mother of Omar Cigarán. At his side, in the same row, behind, in front, about a hundred mothers like Sandra. They all stretch in their neck, they sing while they scream, they jump as if their bodies are amused by the rhythm of the drums, but there is no pleasure. It is pure pain. The Fourth March against the Easy Trigger, a frequent march with simultaneous responses in a dozen cities across the country – to confirm that it is a policy and not a mistake, let alone a rotten apple – has left Congress and ended on the Plaza de Mayo, and united two powers of the state they consider responsible. The other power, Justice, is absent and is the claim, justice for the dead children. The motto: "Enough easy trigger, no child less, not one piba less, no more bullet, the state is responsible."

Sandra is one of the family members of the easy trigger victims who marched yesterday. There was Ivonne Kukoc, the mother of Juan Pablo, the boy who was the initiating victim of the Chocobar doctrine. His face begins to become a painful emblem. There was the family of Cristofer Rego. There were Ruben and Carolina, the parents of Lucas Cabello; the mother of Nazareno Vargas, Mariana Sánchez; Angelica Urquiza, mother of Kiki Lescano; and Dolly Sigampa, mother of Ezequiel Demonty; and how not to mention Raquel Alegre, mother of Luciano Arruga; Miriam Medina, mother of Sebastián Bordón; María Viera, mother of Fabián Gorosito. There were so many. Impossible to mention everyone.

And it was so painful to mention their names, which of them or they would have chosen to be mentioned in that list, where the callers are the memory of their children.

What was clear in this Fourth March was concentrated in the head of the column that occupied several blocks of the Avenida de Mayo: it was fed, they were more, compared to other years, where the weight of the column was supported by the militancy who made their contribution to the claim. This time the number of white shirts with the slogans against the easy trigger and the names and faces of their children was immense, it was fed, there were many, there were too many. "We feel a lot of pain because of the loss, a great thirst for justice for all children," Mariana Sánchez told this reporter.

The figures the family member read at Plaza de Mayo said: "Since 1983, more than 5500 have been murdered by the state." This includes young people shot by the police, run over by patrol cars, shot by Gendarmerie or Prefectura, or the Penitentiary Service that is.

"It's a genocide by infusion," said another mother, nobody knows which, it does not matter. "The explicit defense by President Macri and his minister of security Patricia Bullrich of the assassin of Juan Pablo Kukoc, who publicly celebrates that the Chocobar policeman shot in the back, clearly shows how easy the trigger a government policy is," they read as part of the document de and the next of kin at the end of the march.

"They will never be able to silence our call, because it comes from our stomach like our children did." Justice will be when the state effectively leaves our children and children and for that it is necessary to change the contents of the system and change society. "

During the march, which started walking around at the Plaza Congreso around 5 pm, the T-shirts and bibs, and flags and banners of La Garganta, moved restlessly, a strong and permanent presence in the villages.

Some of his militants had the face of the little boy who had stamped Kevin. There was Higui, who fights for his absolution, accompanied and accompanying. There were also the militants of Correpi, with María del Carmen Verdú at the head. "The increase in repressive politics is directly related to the social situation because repression follows the adjustment as the shadow for the body," the lawyer told PáginaI12. The family of Lonko Facundo Jones Huala also marched. The MTE-CTEP, the MP La Dignidad, Barrios de Pie, MST, the FP Darío Santillán. At the same time, in Mar del Plata, Bariloche, Posadas, Cordoba, San Miguel de Tucumán, Rosario, Mendoza, Santiago del Estero, San Juan, Jardín América, Cipoletti, Trelew.

Very small, with a banner that was bigger than his size, in which Justice was read for Walter González, a little boy was marching. "Yes, I am Walter & # 39; s brother," he said with dignity.

The column drummed his pain and was already on the Plaza de Mayo. Then Norita Cortiñas would come to read the document against the policy of the police state.