Marley with Mauricio Macri in the Casa Rosada: Mirko's reaction when she sat at the Rivadavia chair 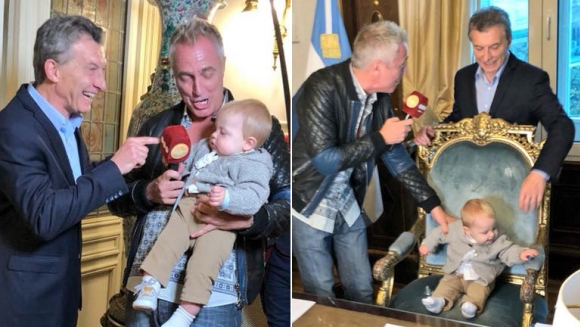 In the last program of the year of All over the worldThe driver and his son were with the president. Video!

The last program of the year of All over the world and what better way to do it than from Argentina. Marley and your baby, Mirko, toured along the streets of Buenos Aires Lizy Tagliani and they marveled at some of the city's attractions.

The trio visited the Teatro Colón, the National Congress, the Japanese garden, the Olympic village, the Puente de la Mujer in Puerto Madero and the Casa Rosada, where they were received by none other than the president, Mauricio Macri. The president acted as a guide, showing them his office, the historic furniture of the place and the privileged view that can be seen from the mythical balcony.

At the end of the interview, the president allowed Mirko to sit in the Rivadavia chair. "In thirty or forty years, the future president," Marley joked with his typical humor. However, everything would indicate that the baby has different plans because he started to cry immediately. "He did not like it, a lot of responsibility," the driver finished.