Scandal in the Council: shouts, simulation and nafta on fire Rosario3.com 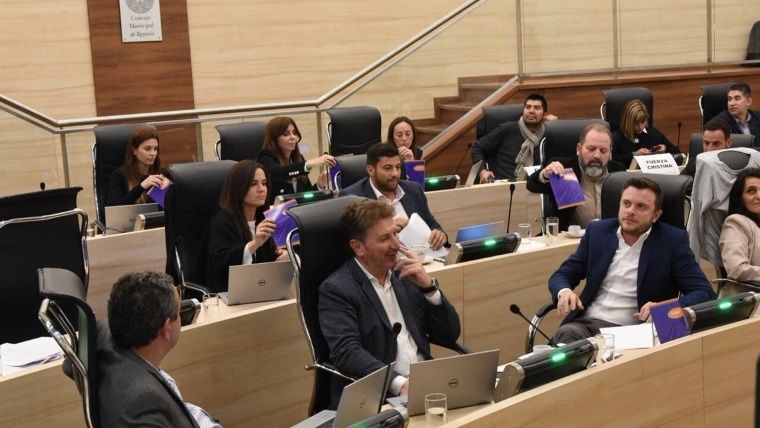 An interesting theory of appearances and simulacra erupts in the Merlí series, on average of the second season. Accessible through a digital streaming platform, the Catalan series with Francesc Orell approaches philosophy through the eyes of a teacher who chooses the tortuous way to teach his students not to trust the performances or the predetermined order, in the contradictory path of philosophizing.

Well usable, simple that results in a television approach to philosophizing, can be some of the theories when it comes to interpreting a reality that stunned us time and time again. And to finish it off, with an increasingly overwhelming frequency. And it is difficult to unravel the assembly in advance. If we realize what is happening, it is already late.

This week the political soap opera came hand in hand with the delicate economic situation, amid a strong devaluation that threatens to wipe out the small remains of the bag. In the city council, in the final part of a session of few lights, as described in the chronicle that was published Rosario3.com this Friday the councilors Roy Lopez Molina and Juan Monteverde were ugly.

It all started when the Mayor of Ciudad Futura, Monteverde, asked for the word to mention the strong devaluation and the representative of Cambiemos withdrew from the hall because of the conditions on which his colleague criticized. The Monteverde event was eloquent and powerful: he warned that he would leave the protocol and use inappropriate words. "We are on a day where everything goes to hell and there is no other way to express it." When the president of the Council, Alejandro Roselló (PRO) warned him about the vocabulary, the mayor of Ciudad Futura replied: "It is much more serious what you do than misplaced a word".

"We are witnessing one of the most brutal devaluations, and it seems to me that we can not end a session as if nothing happened, we must give an answer from the policy," Juan Monteverde said and accused his colleague of Cambiemos Roy Lopez Molina. "to sit with his mobile phone while charging a fortune per month".

"Can you stop using the phone because there are a lot of people who are struggling with Roy Lopez?" Early Monteverde. Molina withdrew from the auditorium and that brought more criticism from the representative of Ciudad Futura, who ended the speech with the request to stay: "They earn 90 thousand pesos per month, Rodrigo López Molina." Come and face. , people are starving, rat. & # 39; He also earns 90 thousand pesos.O 90 lucas.Do you donate? Yes, 70%, according to the same said, go to the self-management project that serves the political space of Ciudad Futura. With the money of all, in part, a partisan political space is financed, not to tear the garments: all other forces do the same, call kirchnerismo, Cambiemos or the Progressive Front, although they do not make it explicit like Monteverde, Caren Tepp or Pedro Salinas.

Then he added: "If Roy Lopez Molina does not want to answer me because I am not worthy of what he is worth and what his shoes are worth, at least he will answer the people." Trascartón, for the absolute passivity of the representatives of the ruling party, read the Civil and Social Progressive Front, said: "When people come to set everything on fire, I will be at the nafta." Absolute silence later. The members of the party that govern this city have come to defend, which is that silence is part of the most daring strategy.

In Merli, the protagonist of the series of students of the French avant-garde is directed by Guy Debord, The Situationist International. That group of thinkers worked out the idea of ​​capitalist consumerism as a model of social control. A "society of the spectacle" where images are digested. It calms citizens by creating a world of hypnotic images and narcotic forms of entertainment. "

The leadership of this time seems to have been formed in that theory full of amusing simulacra. In the first place, the city council has a look and a scope of which the name indicates, it is municipal. National laws are not digital nor are laws issued. Unless someone is lost, it makes no sense to blame the council members for letting us change the damage we all suffer from the brutal devaluation. Nor was it logical that those same councilors, who had been insulted and retired, had spent money on the purchase of notebooks that Gloria had put in the Kirchner days ago, the cause of the notebooks of the corruption of Oscar Centeno driver, involving dozens of businessmen his and former Kirchner officials. Neither did the request to remove the bust of Néstor Kirchner from the four squares of Barrio Belgrano, so that the Council became a television set in which Councilor Norma López showed a T-shirt with a photograph of the former president in the can be read as "to hold". None of this is logical outside of a television program. Much less in a housing that is intended to sanction laws of local scope.

In which millionaires have been invested to make it a municipal legislator of the most modern in Latin America.

The society of the spectacle is not a new idea. And probably does not properly describe the role that the appropriate silences play. When the controversy broke out in the notebooks, the government party in the Council was silent. When they asked Cambiemos to remove the bust of Néstor, they were quiet. And when it was time to vote or place it or not, they voted with the Kirchner. And finally, when the municipal mayor, Monica Fein, visited De12a14 and the journalist Sergio Roulier asked him about the devaluation, the launch of the new transport system and the devaluation, closely linked to the final result of the tariff, he did not give any details. But on Friday afternoon, in an old strategy to show when everyone was looking the other way, he bleached that the new study of transportation costs would result in an increase of the ticket.

Lights, shadows and silences comfortable and uncomfortable. Television installation. To quote Giovanni Sartori, the inventor of the concept of tele-politics or government for what can be seen on television, would be more than struck down. It would be clear. As it should be to put yourself in the position of representative by choosing the moments to assemble the shows: it is not always appropriate to tighten the rope and more when there is fear. More when it threatens the shadow of hunger, which is the evil that shakes the institutional order. At those times it is better to listen to the voice of responsibility than to fall into the temptation of the spectacle.

Unless we are worse. As Jean Baudrillard once wrote, the society of the spectacle is not divisible as Guy Debord understood it. For Baudrillard, reality and image, false and true, are confused in a natural way in the hyper-realistic world of simulation.

A world that never ceases to throw petrol into the fire.