Searching in Recoleta: little militancy, light crosses and some chants for the house of Cristina Kirchner 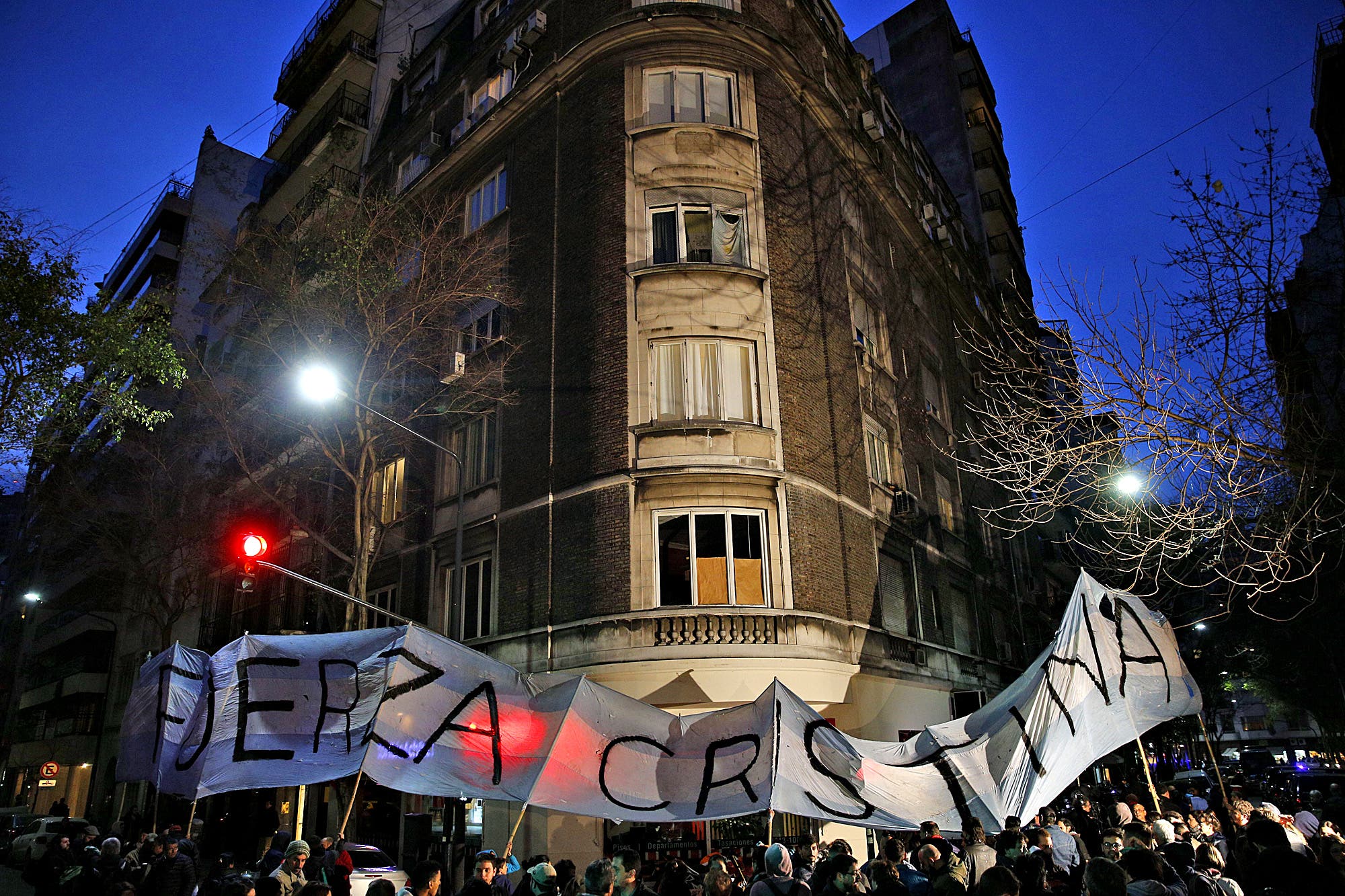 The morning started cold and cloudy, with a handful of militants, a single patrol car and a large number of journalists on the corner of Juncal and Uruguay, in Recoleta, where the former president's apartment is on the fifth floor.


Cristina Kirchner
that afternoon
is searched by court order


Claudio Bonadio
in the context of the cause for

The number of people was noticeably smaller at the beginning than on the eve. "Between the police, the press and the militants, yesterday it was an uproar, I had to close the kiosk and they filled it with posters," explained Alberto Ortolani, 79, who stood his newspaper a few meters away. With the passage of hours neighbors, curious and militants joined but the attendance never surpassed the 200 people, of which a third were press workers.

A group of militants repaired posters that were left over from the previous night and hung them, along with new ones, between a traffic light and a pole. You might read: "Cristina comes from the city, do not touch", "We do not want flan, we want social justice" and "Fuerza Cristina", among others.

Esther Gil, 61, came from San Martin to "see the injustice with which they are engaged with Cristina and so she knows that there are not only policemen here". She owned a smithy and explained that thanks to Kirchnerism she was able to pay the various debts she had incurred during the merger in 2001, but that they have grown again since the change of government. "My son works with me, he had four months of repeat orders and in this year he did not have one, this is done so that Cristina loses popularity," he said.

The different passions that the Senator of the Citizen Unit flashed up were especially noticeable among motorists of fleeting passage through the place. The driver of a white car circulating in Uruguay rolled his fingers through the window and cried: & # 39; Hold Cristina & # 39 ;. A few minutes later you heard from a black vehicle that was moving through Juncal "Chorra!". A scene that was repeated with variations throughout the day.

Although there were no flags or party symbols, sporadic chants from the former president were heard and the federal police's entry and witnesses from the department around noon were accompanied by a torrent of whistles. The black trucks with blue beacons from the experts were stationed along the street Uruguay, which hindered traffic. A few meters high, three drones took everything in turn.

The protagonist since the beginning of the day was an elderly man with glasses with a sign saying "Macri: para la mano". For hours the man slogans in favor of Cristina, and against Judge Bonadio and the national government: "Who is the boss of the fatherland since forty years ago? Bonadio, I want to be a witness." His perseverance to talk with passersby, police, motorists and even the cameras, began smiling at different.

There were also people who came to criticize the exmandataria. "They are the biggest thieves in history and the boss is her," she said, referring to Cristina José Luis Irriza, a 73-year-old agricultural engineer. Irriza regretted the delay to initiate the robbery and said that the judge should also investigate "the municipalities, mayors and governors". "I think I should go to jail," said Haydeé, a neighbor in the neighborhood who did not want to give her name for safety. The woman was deceived with the robbery: "I hope they find a double wall or something."

Crossing the same place of people with different opinions generated some discussions and interdicts that did not happen to major. "Who are the owners of the offshore, Macri, Caputo, Dujovne, Lopetegui," a militant who was sent to a neighbor who was out to criticize Cristina. The answer came with an irony: "Did you see it or did Porota tell you?" After a while, the man was offended.

Among those who support the former president, the general opinion was that the robbery, with a large number of media waiting for hours, was staged. "It's all armed: this is a show so that people do not support Cristina when a search is done that they do not tell you a month earlier," said Tomás Reherman, a 36-year-old cook in Parque Patricios. He believed that the senator "did not touch money, but were his companions" and criticized the country's economic situation: "The province's population is dying of hunger, even do not have to buy a decanter."