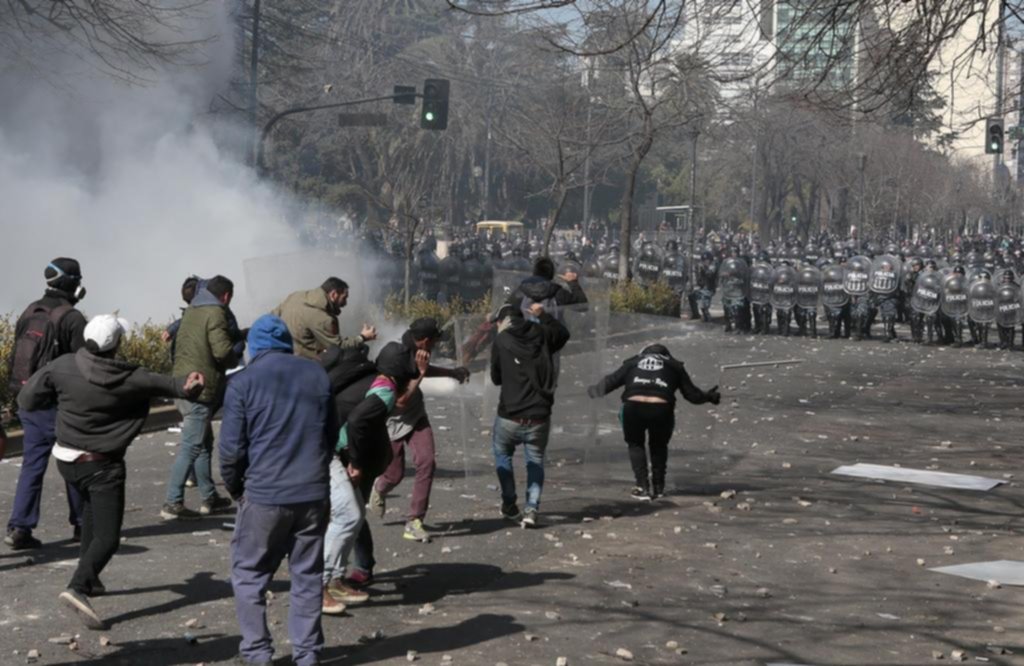 The demonstrators clashed with the police after a group tried to pull in the gates of the interior. The fight continued on 7th Street amidst stones and rubber bullets

The plate center was yesterday the scene of a real battle between workers of the Rio Santiago Shipyard and the police, who left as an injury 13 and six detainees, in the context of a confrontation with stones, tear gas and ended with sidewalks and vehicles destroyed.

It all started after noon, while a mobilization of workers was developing for a wage claim, when they tried to enter the interior and the police then spread them with water.

The demonstrators then responded with a rain of stones that wounded several troops and cracked the glass in the government building, attacking the security cubicle at Plaza San Martín while breaking paths to throw more projectiles against the troops. of conflict shifted to the 7th and 50th avenues with tear gas and shooting rubber bullets.

In addition to a countless number of tiles, countless ball bearings, nuts, screws and molotov bombs were found in the area, which the violent would have used as missiles against the troops. They also destroyed six patrol cars and 10 private cars. They also lit waste containers and started the signs to the bus stops.

The march was called by the Association of State Workers (ATE) of Ensenada and Province, who, accompanied by groups and parties from the left, demanded the removal of two bonuses on salary. The conflict with the government of María Eugenia Vidal is even deeper if the union cancels the reactivation of the factory and denounces an attempt to officially empty it.

In this context, a legal complaint from the president of the shipping company, Daniel Capdevilla, is registered, in which he accuses the trade union of serious irregularities with funds from the company.

After about 5000 people, according to estimates of the police who acted in the operation, departed from the neighboring city of Ensenada and cut the descent of the highway in the morning, the mobilization for the wage claim was moved to the headquarters of the Ministry of Economy, in 8 between 45 and 46, and later on the Plaza San Martín.

Upon reaching the Government House, the most violent began to climb the gates of the entrance gate, and moreover to break the locks that kept him closed. It was this action by the demonstrators that motivated the police to throw water to determine their attitude. And soon after the militants began a rain of stones on the money and the building of the interior, where, among many others, a paving stone crossed the glass of the room of journalists.

They also used the tiles from the square itself as projectiles, which they broke to throw the pieces against the police. Several infantry bodies were then deployed on the square and the 50th and 51st streets to distribute them.

Followed by the order to clear the streets, the police forced the violent back to the 7th Avenue, bringing the focus of the confrontation to the part that goes from 47 to 50.

Almost at the same time that the tension was on the most central street of the City, the merchants reduced the blind of the companies to protect themselves against the excesses. In 7 and 49 a patrol car in an incident was involved in walking over a demonstrator, causing the reaction of the rest of the workers who ran into the vehicle and caused serious damage.

In a constant of progress and withdrawals in both hands of avenue 7, the police services threw gasses and rubber bullets that were answered by the demonstrators with all sorts of powerful elements. Thousands of passers-by were not surprised about the lighting of the confrontation.

The scenes of violence were repeated for almost three hours and made the area a battlefield between the demonstrators and the police trying to circulate, confused taxis, buses and private cars, including the confusion and the fear of encountering governed the manifestation, in some arteries; with a police station, in others.

The spice, no less important, which gave the situation more chaos, was contributed by the lack of fences of the municipality's traffic control which bounded an area with precise circulation. Even the infantry had to cross their own trucks in 7 and 54 to interrupt the passage of vehicles and prevent passers-by from exposing themselves to the danger of being injured.

Just past the 15 policemen withdrew and the crowd regained a tense calm. On the 7th Avenue, which covered the blocks from 47 to 50, shipyard workers, union leaders and left-wing militants gave a press conference in which they denied the actions of the police and demanded by the prisoners, two of them, according to them claimed with injuries (see separate ).

Between choripanes, songs and flags measures were announced to reject the event, including a strike for the day of the ATE province. The asphalt was mined from cobblestones of all sizes, which even originated from two dump trucks lying in front of the Galician bank. Smoking, the containers had already been reduced to ashes, the bumper of a patrol car was over a disabled ramp and signs that had been pulled out of the bus stops were kicked and trampled by passersby who used the tape asphalt as a path.

Curious, a woman interrupted a policeman who rested on the sidewalks of 7 and 51. & # 39; What happened? & # 39; He asked. "There was a mobilization," he replied. The lady looked at the desolation of the square, the street covered with debris of different sizes, the low shutters of the shops and the infantry cord that still guarded the doors of the legislature. Surprised she walked away without saying anything.