The currency crisis in the world media: for Bloomberg, "bad communication fueled the collapse of the peso" 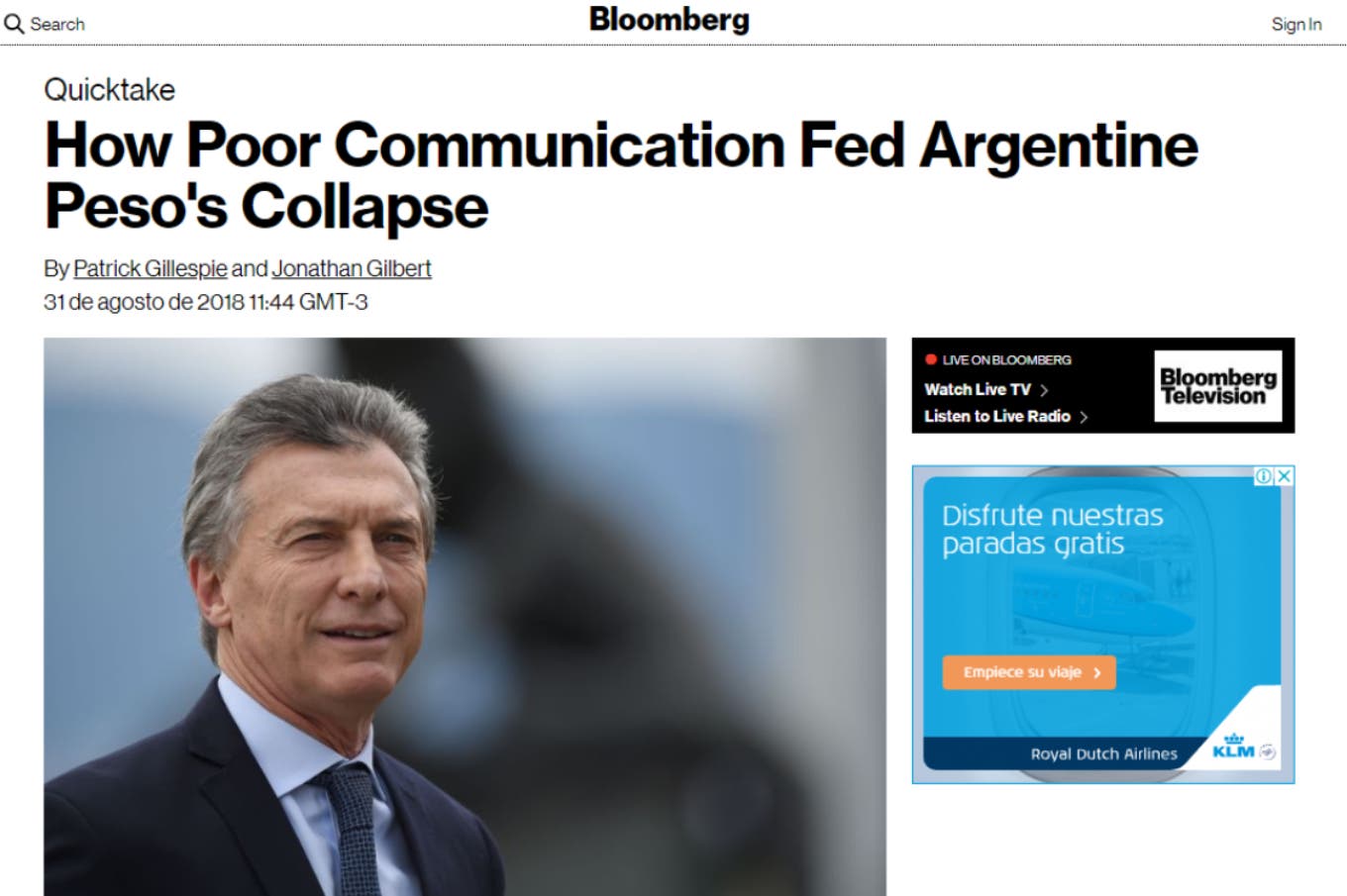 "A combination of bad luck, bad communication and confusing policy". This is how the reputable agency of
Bloomberg financial news


depreciation of the weight
Argentine, which so far lost about 50% of its value this year, is according to the medium the worst performance currency in 2018 with the Turkish lira.

For Bloomberg, although the economic problems in Argentina grew steadily throughout the year, "the trigger for the recent collapse was the vague and poorly coordinated communication strategy of its leaders."

For example, journalists Patrick Gillespie and Jonathan Gilbert repeat the announcements of last Wednesday: "Firstly, in the morning,


Mauricio Macri
He said that the


International Monetary Fund
(IMF) agreed to anticipate a credit line. But the fund did not respond at that moment and said only hours later that it would consider Argentina's request. In the middle, the government of Macri was short to offer the details of the advance ".

On the other hand, the central bank's measure to raise interest rates to 60% did not stop the fall in the peso, the agency said. Nor does the sale of reserves. "The lack of a clear, consistent strategy causes investors and the public to lose confidence in the government of President Mauricio Macri," Bloomberg summarizes in an analysis devoted to last week's exchange rate stress and entitled "How Bad Communication Nurtured the Collapse of the Argentine peso. "

"In January, the Central Bank had lowered the rate, but there were no signs that inflation was going to fall, which raised suspicions that the government was using monetary policy, despite the fact that the plant was independent." Drought destroyed the main exports of the country: soy, and the rise in interest rates in the United States aggravated the situation, "summarized Bloomberg.

For the agency, regaining market confidence is reducing the deficit. Referring to economist Alberto Ramos of Goldman Sachs, Bloomberg believes that a shock of tax adjustment is the antidote to the loss of trust & # 39;

"The question is whether Macri can do this without increasing social unrest before the presidential election of October 2019, where he will be re-elected," says Bloomberg, who also asks "why Argentina is always in crisis", and answers : "It is a country with a lot of resources, but with a history of bad rulers, with a political polarization that has been decades and a tendency to opt for quick and short-term solutions that lead the country to repeat a constant cycle of growth and crisis. ".

Bloomberg is not the only specialized media
continues with the coverage of the Argentine currency crisis.
The Financial Tmes, for example, emphasizes that the greatest concern among investors is whether the country will be in a position in the coming years to cope with the maturity dates of the debt. "Almost 80% of Argentina's state debt is in dollars," says the FT.

The British agency
Reuters, on the other hand, indicates that this fear also translates into political concerns. "The weakening of the peso is also an indicator that the election of next year may go wrong,"
says the middle.