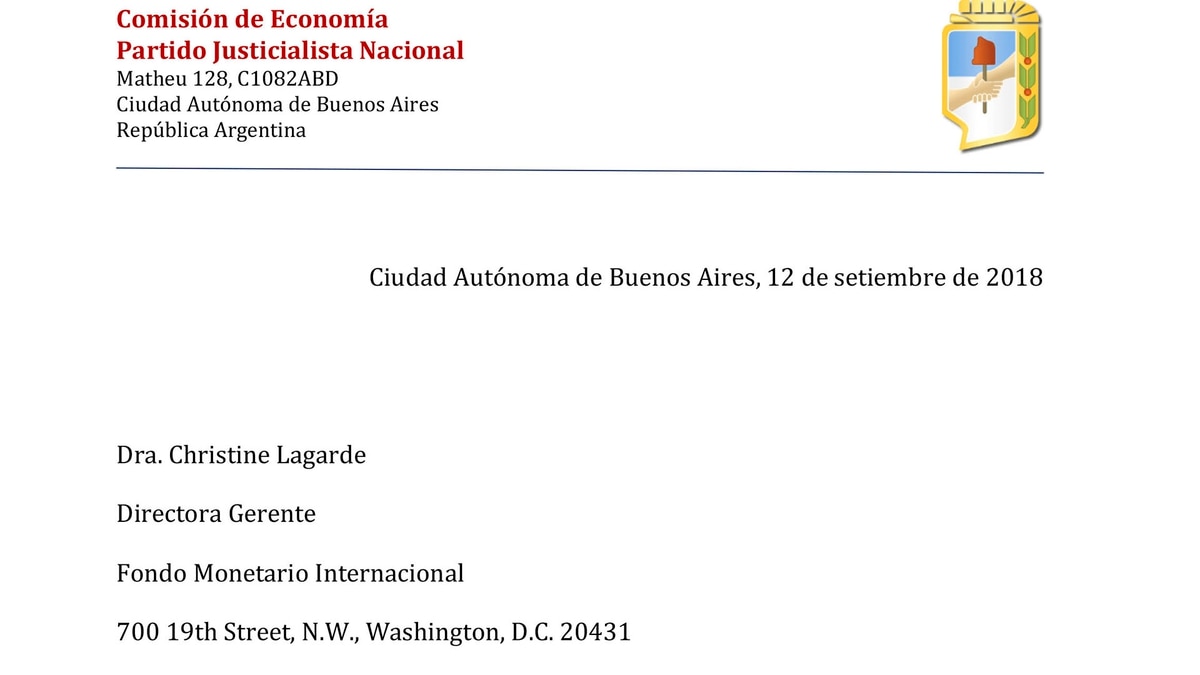 "Autonomous city of Buenos Aires, 12 September 2108. Dr. Christine Lagarde, Director of the International Monetary Fund". With that head and the letterhead of the National Judicial Party based on Matheu Street 128, Peronism sent a letter to the head of the IMF asking him to donate funds to the Mauricio Macri government.

This happens at the moment the government negotiates with the Monetary Fund on the progress of the "necessary means to ensure compliance with the 2019 financial program, as announced by Macri himself in his message of 29 August.

It also occurs at a time when the government is making progress in the negotiations with the peronist governors to reach the approval of the 2019 budget.

"In my capacity as President of the Economic Affairs Committee of the Judicial Party of the Argentine Republic, I have the honor to communicate with you to convey the concern for the proposal made recently by the President of the Nation, engineer Mauricio Macri, stating that he intended to negotiate with the International Monetary Fund the possibility of payment of the duly signed Stand-By Agreement, corresponding to the years 2020 and 2021, will continue until 2019" begins the letter signed by former Minister of Commerce Guillermo Moreno.

The letter continues: "Because it does not escape his knowledge, there will be general elections next year for a new presidential term. It goes without saying that, according to the contract signed and then ratified in the presidential exhibition, the current government only intends to achieve a fiscal balance in the item corresponding to the business income and costs, thus reducing the deficit. in the public accounts it continues to represent the payment of interest on the public debt. "

"If, in turn, the closed international credit markets were maintained, the management of sound economic policies by a new government will be hampered to the limithe adds.

Finally: "That is why I put Mr Pablo Challú, Dr Rafael Perelmiter and Mr Guillermo Nielsen, members of the body I foresee, into contact with the members of your staff whom you kindly designate, for the purpose of reflection to the problematic ut supra and the possible solution ".

Moreno, often questioned by his manners, says goodbye with flowery words: "Without another special one, and at your disposal, I say goodbye to you with my most overwhelming consideration".

The letter to Lagarde was sent on the same day that a team of IMF technicians arrived in Argentina, led by Roberto Cardarelli, head of the multilateral organization's mission in the country. The mission arrived in Buenos Aires to follow the meetings with the teams of the Ministry of Finance and the Central Bank following change, at the request of the country, the conditions of the standby agreement for USD 50,000 million that the country signed with the agency in June.

"The IMF team led by Mr. Roberto Cardarelli is currently in Buenos Aires to continue discussions with the Argentine authorities to strengthen the IMF-supported program, and the Fund's employees will work intensively together, in collaboration with the IMF Government, to determine how the IMF can better support Argentina in the light of renewed financial volatility and a challenging economic environment Our common goal is to quickly come to an end to these discussions for a proposal to the Council of Ministers. IMF administration ", assured a spokesperson for the organism.