The wave of collective apostates in Cordoba and the country is growing News directly from LAVOZ.com.ar

The wave of collective collectives & # 39; grows in social networks at local and national level. In Villa María they have already made an appointment for the second meeting. San Francisco will have theirs on August 26 and in Río Cuarto and Carlos Paz there are also groups formed.

Collective apostles are meetings that take place in the various places where a group of people advise those who want to present their resignation, for various reasons, to the diocese where they were baptized.

They are told how to write the letter and start the process in order not to join the institution.

ORANGE PAÑUELO, used by those who demand a separation between church and state.

Although the movement existed more than a decade ago, after the Senate rejected the legalization of abortion, the number of consultations and demands for compliance with a layman state began to grow.

"The main goal" is the separation of the Church and the State "and also," making a legislative follow-up of several projects dealing with attacks on secularism that have taken place in recent years, "stated Profile Pao Raffetta , member of the Collective Apostasy campaign and member of the Argentine coalition for a layman.

In a Facebook group called "Collective apostasy", whose motto is "not in my name" and "separate issues of church and state ", the other local groups are grouped and comments related to the theme and the meeting days are shared on the basis of each place.There are already groups from Tucumán, Entre Ríos, Mendoza, Rosario, La Rioja, San Juan, Buenos Aires, Misiones , Bahía Blanca, among others.

Because the groups remember that the Catholic Church was against it: against the female voice in 1947, against the divorce law in 1987, with the law of integral sexual education. n 2006, the equivalent marriage law in 2010, the assisted fertilization law in 2013 and the law of legal, safe and free abortion in 2018. 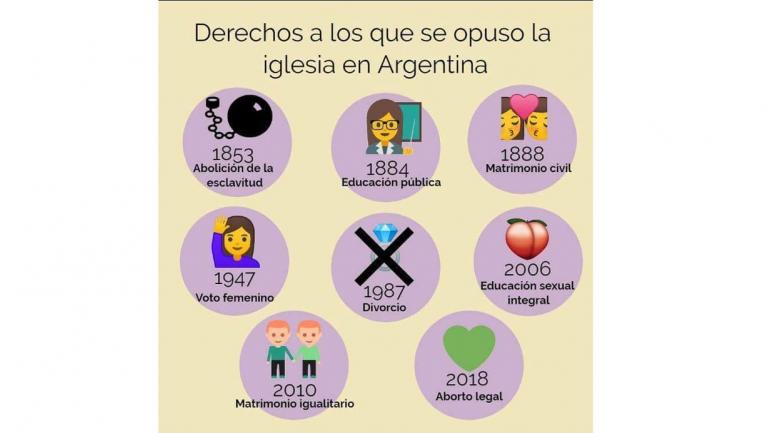 ARGUMENTS Some of the reasons that those who are engaged They take the decision to resign from the Catholic Church.

In the province of Córdoba, the city of Villa María was one of the first to make the proposal, via a Facebook group they invited a meeting for the 9th of August and the date of the second, which on 11 September will be in Manuel Belgrano St., from 10.30 am to 11.30 am

San Francisco will have its collective apostasy on Sunday, August 26 at 16.

Carlos Paz and Río Cuarto have already published Facebook page's for consultations, although they have not yet set up meeting dates.

"The reasons why a person would want to be apostate are the most varied." Because the Catholic Church counts every baptized person as a Catholic, there are atheists who feel it is their duty to report to maintain consistency, there are also people who fall away because they disagree with the doctrines of the church, even if they believe in God, so apostate so that their name is not part of that institution ", they indicate on the website www.apostasía.com.ar. 19659002] And then they clarify: "The Catholic Church to be questioned states that almost 90% of the country is Catholic (AICA Bulletin No. 2500) and indirectly supports its doctrines, that is, they are built in the voice of the people, and you who were baptized are counted among the 90%, the reality is that 90% of the country is baptized, and even the very small percentage of practitioners disagree with their doctrines (CONICET survey). "