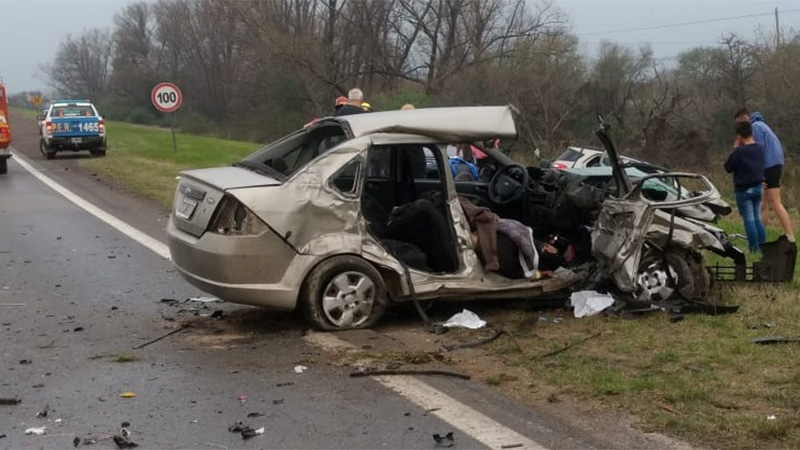 The huge shock registered at Ruta Nacional 12, in the south of Entre Ríos, claimed the second victim. It is the 71-year-old woman who traveled in the same vehicle as the first fatal victim.

Is that in the afternoon of Saturday there was a violent clash between two vehicles, in the area of ​​the highway on Route 12, near Ceibas. A Ford Fiesta Max car misplaced and crossed his hand and collided front against a Ford EcoSport truck.

According to the medical report of the medical guard of the Centennial Hospital in Gualeguaychú, the woman was in a critical condition because of the multiple injuries that caused her internal bleeding

He had undergone a cardio-respiratory arrest in the hospital, but the hospital's doctors used resuscitation techniques to save his life. She was referred to the Intensive Care Unit with a very cautious prognosis, where she ultimately did not resist and died at 10.30 pm on Saturday night.

On the other hand, the 14-year-old girl who traveled on the Fiesta received only minor injuries and was admitted to the hospital, while the 19-year-old driver left a broken tibia and fibula and remained interned in the intermediary care room.

The driver of the Ford EcoSport truck, a 63-year-old man, was not injured. However, he was also admitted to the hospital, while a 58-year-old woman sustained a serious injury to a limb that required partial hand amputation and is currently in the operating room. The third resident, a young man who had not reached the age, had a fracture of the tibia and fibula and was also admitted to the hospital.

About the fatal accident

On the afternoon of this Saturday there was a violent clash between two cars in the area of ​​the highway of route 12, near Ceibas. A car confused and crossed his hand, head-on colliding with another shot. The balance was two people killed and five wounded.

Some witnesses told police personnel that the driver of the Ford Fiesta would have lost control of the car by biting the shoulder, leading to cross-hand and impact from filled with the Ford Eco Spor SUV NAS 633, which ran in a north-south direction.