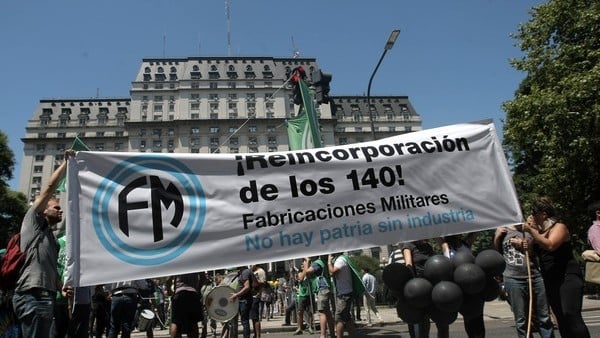 On Friday there were hours of tension in three factories of Fabricaciones Militares in Córdoba and Santa Fe. In the presence of Gendarmerie troops, the workers first and foremost took up peacefully one of the headquarters of the state-owned company and then informed them. fired ordered by the Ministry of Defense.

After the discharge list was given, the Minister of Defense of the Nation, Oscar Aguad, acknowledged that "about 200 contracts" in Military Fabrications would not be renewed. "Nobody can think that after 70 years of waste of resources and systematic corruption, the country can leave without sacrificing, we are reducing the structures and redefining the role of Fabricaciones Militares . bringing sacrifices that are painful, serious, "said the Cordovan responsible for Defense, in statements against Cadena 3.

In his arguments, Aguad said the shortage of FM, which produces gunpowder, ammunition and military supplies. it reaches $ 1,600 million per year.
"What we are doing to correct this is to reduce the structures, improve competitiveness, because the decision is to keep the companies that produce for the defense," he explained.

part, the Association of State Workers (ATE) denied the dismissals in a difficult statement. "Employees of the national military factories are alert to the layoffs that were due to take place on Tuesday, as announced by the directors of state institutions, in application of the Mauricio Macri government's adaptation plan for the production of gunpowder facilities and explosives, all of which have already been emptied and closure of the plant in the city of Azul, "they said.

"ATE, the bodies of deputies and the assemblies of workers are organized to withstand the reduction and guarantee the continuity of work in all seats," they warned the union.

And they demanded a mobilization: "On Tuesday there will be a mobilization in Villa María." With all our strength and pain this means, we send our solidarity, our support and we will make all decisions from the national board of ATE. supports taken by the employees in the assemblies. Next week we will take joint measures at national level of all military factories to fight for the recovery of all our comrades who are being fired. "

Last December, the Department of Defense had decided to close the factory that it was working in the city of Azul, Buenos Aires, where 230 people were working.