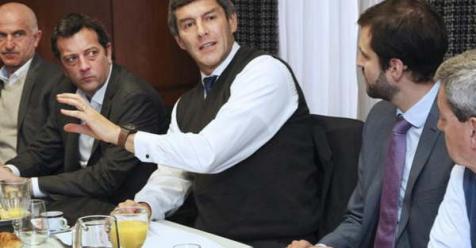 KEY. The holders of the Economy portfolio have dealt with a number of central issues that affect them.

The Ministers of Economy of 18 provinces met with national officials from the Ministry of the Interior in the House of Salta, at a meeting in which they began the sketches of the adaptation by provincial jurisdictions in 2019, which initially provided for a global reduction of $ 185,000 million, but that would be reduced to $ 100,000 million, according to sources participating in the meeting.

In the case of Santiago, the province was represented by the Minister of Economy, CPN Atilio Chara.

Initially, the call included the participation of the Ministers of Finance and Home Affairs, Nicolás Dujovne and Rogelio Frigerio, but did not participate in the meeting.

Minister of Economics CPN Atilio Chara, who attended the meeting to defend the provincial interests, said that national officials "proposed a global adjustment to the provinces that would initially be about $ 185 billion, but will see they will item for item judge, but what has remained fixed is the soya discount, which no longer reaches the Federal Solidarity Fund for the provinces, "he said.

He emphasized that now "there is an impasse, next week there will be a new meeting, but there is nothing definitive."

He added that "the only thing that remains solid is that of the soy fund and that they want to reduce the amount of global adjustment to provinces from $ 185 billion to $ 100 billion."

A proposal that originated from the provinces -and among them Santiago- for the sojafonds & # 39; was postponed until 2019, the entry into force of the cutback, so that money will continue to come until it has finished performing the budgeted with those funds this year. It was one of the points used to analyze national officials. But for now the reduction of the "soya fund" remains firm.

"Everything is being evaluated and it will be analyzed to reach an agreement in which we all agree", said a national official who attended those meetings.

For now, the proposed reduction of the nation firmly in favor of the provinces would "repay exports and VAT," said the Minister of Economy.

But other items that Nacioó contributes today as the transport subsidy, the Fonavi or the Incentive Fund, "the idea is to remove it, initially it was said that it would be 50% removed, but they want to completely remove it. That is why there was a question about this possibility and national officials were left to review it ", Minister Atilio Chara said.

The same intention to prune the Nation points to the Fonavi (Housing Funds) and the Fonid (Teacher Incentive Fund) "the only thing we would not get is the funds that relate to pure employee participation such as VAT and income", said she.

"All these proposals are on the table, nothing is decided, but we will see how things go, there will be an impasse and a new meeting next week," said the minister of the province.