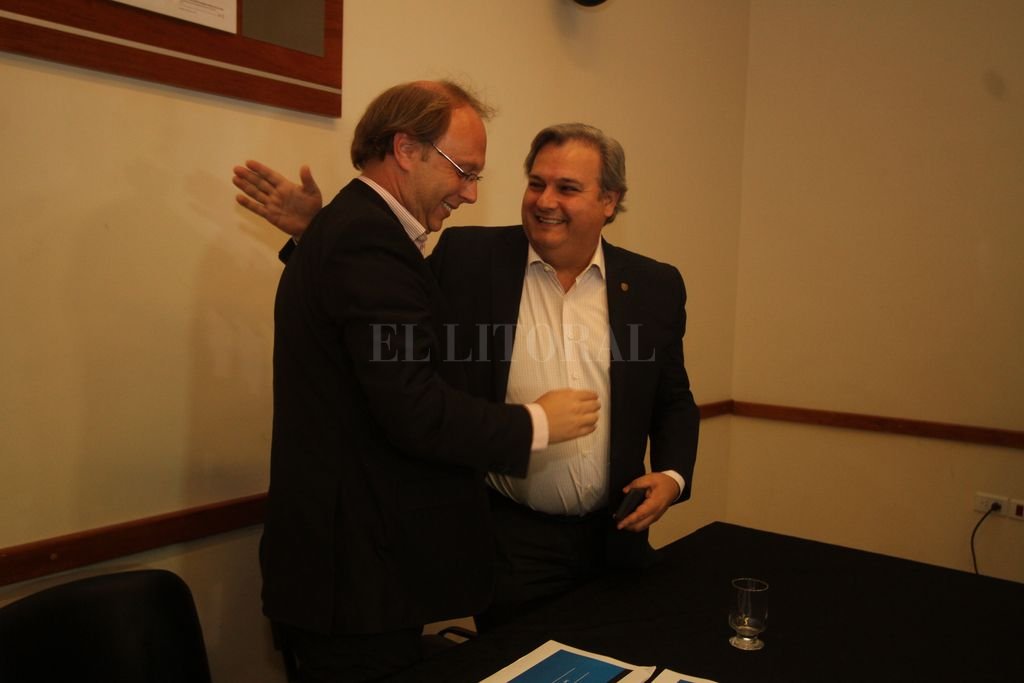 Farías and Saglione will lead the plenary session at the Provincial Cultural Center. Olivera convened the intendants and the communal presidents of justicialismo to join the position to take the conclave.

Saglione and Faras will be in charge of today's meeting at the Cultural Center. photo: Guillermo Di Salvatore

The Ministers of Government and State Reform, Pablo Farias, and Economy, Gonzalo Saglione, will lead this afternoon with the joint presidents and presidents of the entire province to discuss the scope of the elimination through a DNU of the so-called Federal Solidarity Fund or Soy Fund. . In House of Government they have not ruled out that Governor Miguel Lifschitz will participate at a certain moment in the meeting to be held at the Provincial Cultural Center "Francisco Paco Urondo".

In the last few hours, telephone contacts between community leaders and legislators have taken place to evaluate alternatives to be proposed in plenary.

In House of Government the aim is to reach agreement on a document that questions the official DNU and if it succeeds, it would be delivered by Lifschitz itself to the authorities of the national government.

The president of the Right-wing Party, Ricardo Olivera, convened for the first hour this afternoon the provincial executive council and legislators to receive intendants, councilors and municipal leaders to try and reconcile the position to be taken with the government. During this meeting at the Crespo Street headquarters, various projects from representatives of the sector, including Leandro Busatto, will be presented to find compensation mechanisms so that the local authorities do not lose the budgeted resources. Meanwhile, Claudia Giaccone postulated that the government rejected the Fiscal Consensus because of the failure of the national government to support the Soy Fund.

Last night Carlos Torres, secretary of the regions, municipalities and municipalities, recorded details of the meeting in the Cultural Center. The intenders have a hectic schedule on this day in the province since this morning they meet in the plenary session and then attend the continuity of the mandatory conciliation procedure with Festram in dependencies of the Ministry of Labor. The differences are in the application of the trigger clause in the wage agreement concluded in March.

The justicialistas intendants and the radicals have compromised their presence in the meeting of the afternoon. The same did the registered in Cambiemos, including that of Rufino, Funes and Las Rosas. The Santa Fe José Corral would also give the present at the meeting. Busatto wants the province to contribute to the support of Fondo Soja until the end of the year. Photo: Luis Cetraro

The meeting in the Cultural Center is opened by Farías and a detailed report by Saglione is expected on the scope of the measure and its effects on local authorities.

On 31 July of this year, the province received 1,292 million from the Soya Fund, of which 30 percent was transferred to municipalities and municipalities in relation to the tax rates. The province estimates 2300 million for this year in this concept, of which about 650 were intended for the 363 municipal and municipal authorities. The fund's impact is exclusively for work, whether education, hospital, water or road.

The intendents warn that the DNU issued by the national government removes resources and makes the continuity of ongoing work more difficult and that they have affected these resources. Few people started legal investigations and with colleagues from other provinces to investigate the possibility of appealing to the decision of the national executive.

Faced with this situation, Busatto yesterday submitted a bill to provide a "compensation fund for municipalities and municipalities & # 39; to solve these works and to avoid the change in the normal development of the work plan.

He estimated that the amount that municipalities still have to receive for the current year is 0.3% of the total funds of the central administration. The project plans to expand the mentioned funds for the next two years, which would amount to 0.65% of the total costs of the Santa Fe government. Busatto – registered in Unidad Ciudadana – made a strong defense of the federal solidarity fund launched in 2009 by the then President Cristina Fernández de Kirchner. "This regulation was part of a series of heterodox instruments implemented by previous governments" and explained that "is very different from what a neoliberal government does, than before the first dive into economic activity: adapt, adapt and always adapt", points the bill in the base.

The text also questions the DNU, which describes it as unconstitutional because it "ignores the affirmations made by the provinces at the time and did not require the same approval for their elimination, making provincial autonomy, the federal system of government, an insurmountable damage in the provincial and municipal budgets and signifying a clear setback in the system of gradual distribution that was laid down in the same decision 206/2009 ".

Giaccone for his part warned that "beyond the claims, the possible protection, to seek additional funds, what will prevail, the adjustment is, and they move it to the provinces, it's what we have to withstand" and with that foundation he demanded the withdrawal of Santa Fe accession to the Fiscal Consensus
"Santa Fe has to leave the Fiscal Pact, the nation has not kept its debt or the sovereign fund, we said it was only promises when we voted against accession in exchange for the loss of fiscal autonomy," added the deputy to it.

In July, the construction costs in Santa Fe rose by 2.83% compared to June, the Ipec reported. With this indicator the increase in the first seven months is 20.95% and in the last twelve months it was 26.42%.

The July indicator was composed of an increase of the material by 5.62%, 0.76% of the item general costs and without changes in labor costs.

Governor Miguel Lifschitz traveled to the autonomous city of Buenos Aires yesterday morning and met with the cabinet's cabinet manager, Marcos Peña, whose details they did not exceed. The meeting was confirmed to El Litoral by spokesmen of the Casa Rosada, who also gave no details of the conversation.

The national government has opened several negotiation channels with the governors for the 2019 general budget, while the province maintains the discussion about the form of payment of the debt contracted by the nation after the Supreme Court decision of November 2015 that he gave the reason. Santa Fe. Last night there was speculation about the possibility that Lifschitz also raised political issues of Peña that are inherent to the province.