Wave of rumors: the future of Dujovne and the possible return of Melconian – 09/02/2018 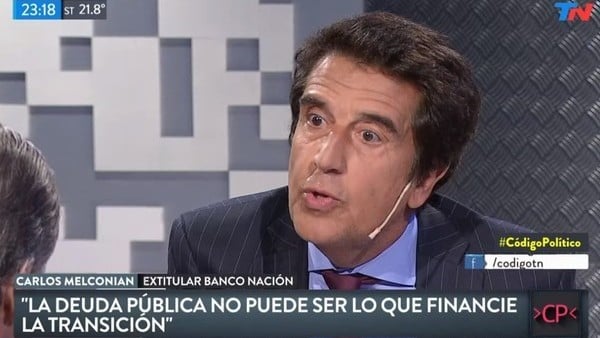 The government is passing through the most difficult moment. After 48 hours of being completely locked up in the Holy Trinityas in Cambiemos, they call on the trio – and not without a bit of malice – against the trio that until now the chief of staff Marcos Peña and his vices Mario Quintana and Gustavo Lopetegui, Mauricio Macri has decided to open the game: on Saturday listened to the mayor of Buenos Aires, Horacio Rodríguez Larreta, and to the governor of Buenos Aires, María Eugenia Vidal. And this Sunday they will go through the Quinta de Olivos We change drivers and legislators.

They say close to the president that the presence of so many leaders who were not even warned about minor issues during the past week will not be a testimony. "Everything is open, nothing is 100% decided "they say. Those voices even rejected the fact that the quarters of Quintana and Lopetegui were a fact, as confirmed by other high official sources.

But in addition to the new cabinet chief, Macri must define a more transcendent issue prior to this Monday's announcement: who will be your minister of finance who travels to review the agreement with the International Monetary Fund. It is that Nicolás Dujovne he had an atypical gesture: in hours when various officials cling desperately to their positions, make the dismissal at least twice available to the President. The first time on Thursday he found a resounding "no", perhaps because the president believed that the demands he received from various sectors were excessive and that he had more room than the last few hours to convince him. At the end of that day, Dujovne announced his trip to Washington.

But on Friday, he warned of the versions that realized he was still in the eye of the storm, He warned again that he did not want to be an obstacle.

Although he always felt supported by Peña, Dujovne soon found out the meeting that Macri had with Carlos Melconian in Los Abrojos. It was not just a chat from friends. In addition to proposing a contingency plan before the crisis, the economist who was cast out without honor from Banco Nación clarified that the trident of the chief of staff was unrelenting to those who had raised objections: "I only grab when all three go".

In contrast to the cases of Lopetegui and Quintana, the continuity of Peña is not negotiable for Macri. "Marcos is the most important official for the president", the last hours from Olivos. Beyond his initial intransigence, Melconian would accept to return to work with the chief of staff who turned out to be his executioner, a little more than a year ago.

On the table, although something is more degrading, the name of another has also been rejected, Alfonso Prat Gay. He was involved in the Animals Loose program to position himself as another man who can convince investors. Both would impose conditions: more autonomy of the headquarters of the cabinet and a stronger formal structure.

Coincidence or not, Saturday in Olivos though began polishing a new Ministry of Finance, with the integration of production, agro-industry, energy and tourism as secretariats.

At the same time, the Minister for Modernization was also summoned, Andrés Ibarra. A good relationship with Melconian – was one of the few who did not hesitate to go to his last birthday, and of the extreme trust of Macri (he accompanied him in Socma and in Boca), since Friday he flew into Casa Rosada, of which the version was included as secretary, in the cabinet to work with Peña. Faced with Quintana, Ibarra was not only saved by his friendship with Macri, a witness of his marriage: his work as a jealous Human Resources Manager of the state was always pondered by the president. Their actions to do the auditor's work that Peña can not do on a daily basis have increased even more at the beginning of the weekend.

Likewise, until late on Saturday night, near Dujovne, they had the suffering that his continuity was not in doubt and that the minister had not offered his resignation. "He was in Olivos preparing for the announcement of Monday and his trip to the US.. ", Repeated the spokespersons consulted during a day when several officials extinguish their telephones, worried about a happiness of witch hunt that was made from the bosom of the government. "The speaker is cut off", Exaggerated – or not – an official via Telegram, after programming the self-destruction in 20 seconds after that message.

The suspicion is explained in the intention of the government to arrive on Monday with a strong announcement.

"We only have one bullet to pass, and we can not fail", at the last moment added another man from the president. At that time no one tried to deny the quotes of Quintana and Lopetegui. And the Melconian plan was under way.