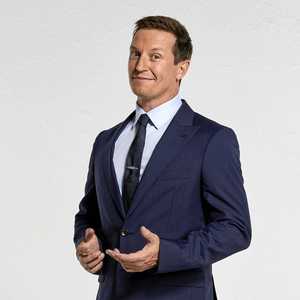 ROVE McManus takes a bigger punt than most during the pilot week of Channel 10.

The network is launching pilot episodes for eight new shows this week, with viewer ratings and viewer feedback determining which concepts will receive the full season next year.

It is first a television, with pilots that are traditionally evaluated by TV executives behind closed doors. It is a new concept that the TV veteran, who has spent his part of the time in the US, is excited to be a part of it.

"In the States they have many pilots and a certain time of year when they hire a ton of pilots, but it's all behind closed doors," says McManus.

"This is the first time the audience sees the shows and decides whether they like it or not.

"Everyone, no matter what happens, will see the light of day, which is unprecedented."

McManus returns to his alternation show Bring back … Saturday night, which is filmed live for a studio audience. It is the only pilotweek project that has yet to be filmed and once the red light is on, there is no way back and no more seconds.

"One of the things that makes me excited is that it is such a huge guess what we do," he says.

"We do not even have access to the studio until the day of the show, not that you can rehearse a live show." When you think normally when you are a pilot, you can do that in the safe studio environment behind closed doors and you can take second take if you want to, I'm enthusiastic, ten are willing to take that risk. "

This is McManus' bid to resume watching Saturday night in Australia, which has been banned to repetitions and films until late.

"We are driving with the idea that Saturday night is a good night to watch entertainment," he says.

"At the moment it's a bit of a wasteland on TV, I'm excited about the idea of ​​achieving this to find an audience that will not be served on this night of the week." If you look at the ratings, it looks like as if it was missing, but it can not be so good that they are all out at parties or a sporting event.

"Maybe you're not going to a streaming service, you can stick to free-to-air TV and there's something for you to watch."

He describes Come back … Saturday night as a mix of Hey, hello it's Saturday, The D generation and his long-running variety show roam.

"It's all those programs that are packaged in one," he says. "We have worked on the tone, invented ideas from the segment, reserved a talent – we have figured out what the show will be like, obviously because we are on a Saturday night, so the idea is to use the fact that it is the most broken night . this week.

"We will cross over to events that take place nationwide, but we also make sure that we have a very exciting live studio program that people can enjoy." "This is all the pieces of the puzzle together. but can not sit back and watch it until the red light begins to flash.

"I am true of a generation The D generation was a show that we would watch before we went out, or if you were at a friend's party, we stopped to watch the show. I think Saturday night has a legacy, probably more than people realize, and it would be exciting if we could ignite the embers again. & # 39;

Bring back... Saturday night premieres on Saturday at 7:30 pm at ten.