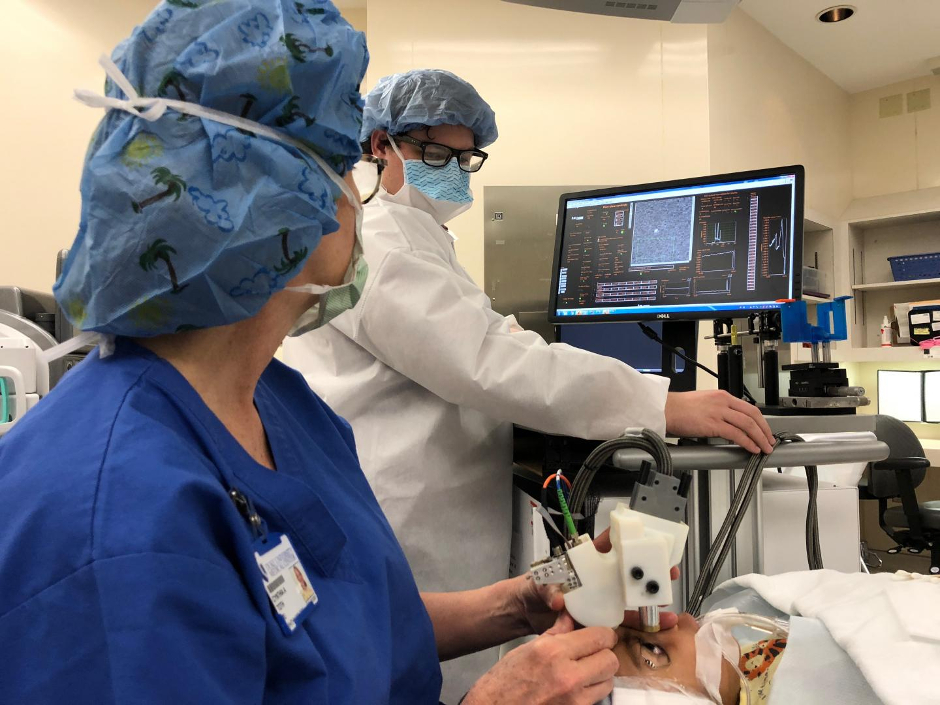 Researchers have developed a handheld probe that can visualize individual photoreceptors in the eyes of babies, a development that can help in tracking early brain development in children.

Based on adaptive optics, the technology at Duke University in North Carolina is expected to make it easier for physicians and scientists to observe these cells to diagnose eye conditions and to make early detection of brain-related diseases and traumas.

Photoreceptors are specialized neurons that encompass the light-sensitive cells of the retina, an extension of the central nervous system at the back of the eye. The retina transmits signals to the brain through the optic nerve, which then processes the visual information. Studies have shown that neurodegenerative diseases, including Alzheimer's and Parkinson's, plus traumatic brain injury, such as concussions, can alter the neuronal structures in the retina.

To study these neuronal structures, researchers usually use an adaptive optic scanning ophthalmoscope (AOSLO), a non-invasive tool that offers a higher image resolution than MRI.

AOSLO allows researchers to visualize individual photoreceptor cells, but such systems are large, expensive and complex, and their use is limited to patients who can sit up straight and fix their gaze for a few minutes, limiting use for young children or for adults with cognitive impairments. mobility problems.

The Duke researchers are said to have transformed the AOSLO into a handheld probe by improving optical, signal processing and mechanical design. This included the development of a new algorithm that replaces the traditional AOSLO's large wavefront detection system, an optical component that can detect light distortion through the eye. The research appears in Optics.

"Other researchers have shown that the wavefront sensor can be replaced with an algorithm, but previous algorithms were not fast or robust enough to be used in a handheld device," said lead author Theodore DuBose, a doctoral student in the biomedical engineering department at Duke. . "The algorithm that we have developed is much faster than previous techniques and just as accurate."

According to Duke, the tool was tested in a clinical trial involving 12 adults and two children, the team reportedly showing its ability to capture detailed images of photoreceptors close to the fovea, the center of the retina where photoreceptors are the smallest and view. is the most acute.

"Our new tool is fast and lightweight so that physicians can take it directly to their patients, and with the probe we can quickly collect images, even if there is movement," says Sina Farsiu, associate professor in the departments of biomedical technology and ophthalmology. "These capabilities allow us to open the pool of patients who could benefit from this technology."

The new design of the tool would make it useful to illuminate the eyes of young children. Researchers can use the tool to monitor early brain development in children by imaging their retina, which develops along with the central nervous system.

In a related application, surgeons will be able to see the photoreceptors at the highest possible resolution during an operation, even when a patient is under anesthesia and in a lying position. It can also help doctors to quickly assess possible brain injuries in athletes.

Before the researchers prepare for large-scale clinical trials, they plan to add additional imaging modes to detect other diseases.

They also made the mechanical designs, calculation algorithms and operating software available online, so that other scientists can adapt the new system to their scientific applications.