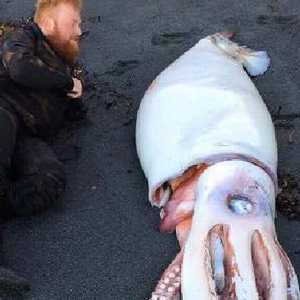 Three brothers were on their way for a morning dive in Wellington when they encountered the impressive creature.

Daniel, Jack and Matthew Aplin were on a trail at Red Rocks on the south coast of the city when they encountered the stranded cephalopods.

The brothers said they had encountered sharks during their diving trips, but had never seen a squid of that size.

The trio contacted the National Institute for Water and Atmospheric Research, which ensured that the squid was collected.

A spokesperson for the Department of Conservation said it was almost certainly a giant squid, whose bodies had been washed up relatively regularly.

Male giant squids can grow to as large as 10 meters in length and have foothills and barbs along the length of their arms.

The giant squid is the largest type of octopus except the colossal squid.

They are mainly hunted by sperm whales, but juveniles are occasionally hunted by deep-sea sharks.

Rumors and observations of giant squids as long as 20.1 meters are widespread, but no specimens approaching this magnitude have been scientifically documented.

They catch the prey with the help of two tentacles, grab it with jagged sucker rings and then bring it to the powerful beak and shred it before swallowing it.

Giant squid inhabits all the oceans of the world and is thought to be lone hunters, because only individuals are ever caught in fishing nets.

An online commentator compared the brothers' discovery with the colossal squid that was held at the Te Teum, the New Zealand Museum in Wellington, which is more than 5.2 meters long.

Last year a squid of 15.2 meters was washed in Indonesia.

This story originally appeared on The Sun and has been re-published here with permission.