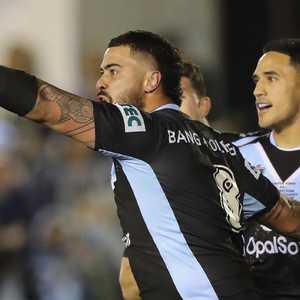 The controversy surrounding Andrew Fifita's outburst at Cronulla's coaching staff during the Sharks victory over North Queensland may have just begun after the towering gag was brought to the club on Monday to meet head coach Shane Flanagan.

Fifita got up and scored and shouted at the Sharks box after he had spent half the game on the bench.

Flanagan insisted in the first instance that there was not much to tell about after the beautiful spray from Fifita, who came after he was told that he was not running fast enough before he was brought off the field in the 19th minute.

"It's no problem, he came back in the second half and did well," he said.

But an interesting clip from the couple who missed each other in the sheds after the 28-16 victory, had viewers who speculated about a break between the pair.

Anyway, there seems to be more happening in the Cronulla camp than first thought that the sharks try to address the situation privately.

"We will handle it in house," Flanagan said Monday. "It's a matter between Andrew and the technical staff."

Fifita apologized to teammates after the victory of 28-16 and claimed that the reaction was directed to Cronulla-assistant Jim Dymock, who criticized him calmly, and not Flanagan, but that was only after he had shortly after the last siren with officials from Sharks.

"It's certainly not the way to respond, and it's not the thing we want to send to kids and all that stuff," Lewis said.

Andrew is an emotional guy, but I thought he was wrong the night before, & # 39; said Ennis.

"I thought that after a match in Luke Lewis and Shane Flanagan there was some really good honesty from some influential figures.

"I thought Flanagan had drafted a plan and given how good Woods had been from the bank, he took Fifita from the field early, and Andrew was clearly not happy about it.

"When you show that kind of emotions, this affects the club and Cronulla is in the headlines for the wrong reasons, instead of that courageous performance.

"Now we concentrate on all the negative things and everyone has to deal with it."

Fifita was put on the bench in the 19th minute after giving a penalty in the run-up to an attempt by Cowboys.

He then returned with 20 minutes to play in the game, as Flanagan claimed that the sharks had to arrange a knee injury for the gunfight for the run-up to the final.

At the press conference after the game, it seemed as if Fifita wanted to be desperate to get back on the field, Flanagan said, "Good for him, it's not his team."

Flanagan resounded Lewis' thoughts and suggested that he talk to his representative about the eruption on Monday.

"You know on the one hand that I love passion and I want him to go there and play like that, but just do your job and go on, he does not have to do that," he said. .

"Apparently it was Jimmy but, as I said, I'm not entirely sure.

"It's probably the look you do not need and it's not a problem for me and we're going through it."

However, Balmain, great Steve Roach, doubts the party line that it was Dymock and not Flanagan at the receiving end of Fifita's spray. Roach said that Dymock was on the sidelines when Fifita scored and not in the box, where he directed his anger.

"Of course it was focused on the coach," Roach said. "Jim Dymock was on the sidelines. (Fifita) pointed to the stands.

"I'll tell you why he did not say it publicly, because the media manager was with him before he did his interview and he was told what to say."