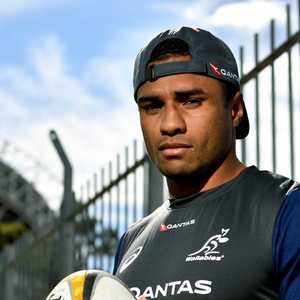 TOM Robertson and Tatafu Polota-Nau start in the front row for the opening game Bledisloe Cup against New Zealand Saturday night at the ANZ Stadium.

Wallabies coach Michael Cheika also chose to start the more experienced Polota-Nau over fellow hunter Tolu Latu, who is on the couch.

Robertson and Polota-Nau will join Sekope Kepu in the first row, while Reece Hodge is mentioned outside as expected.

Jack Maddocks is ready for his debut on the bench, while Pete Samu has won the fight against Ned Hanigan as a back-up flanker from the den.

However, Cheika clearly supports the line-out of Polota-Nau throwing pressure at the beginning of the game, with the All Blacks sure to kick to the sidelines and stack the pressure on that set piece.

The Kiwis are also forced to make a late change to their shares on the first row after reserve Ofa Tuungafase was excluded with a rib injury.

Crusaders backup Tim Perry was named after his test debut in his place on the bench.

The All Blacks dropped Jordie Barrett out of the team and opted for Waisake Naholo on the wing and Ben Smith for the wing defender.

Jack Goodhue is named after the center next to Ryan Crotty, with the title-winning crusaders proud nine of the 23-man squad for the visitors.

TEAMS FOR THE FIRST BLEDISLESS HEAD OF THE SEASON

Get 3 months of free Sport HD + entertainment based on a 12-month plan and watch the 2018 Bledisloe Cup and 2018 Rugby Championship without advertising breaks while playing. Terms and conditions apply. SIGN UP NOW>