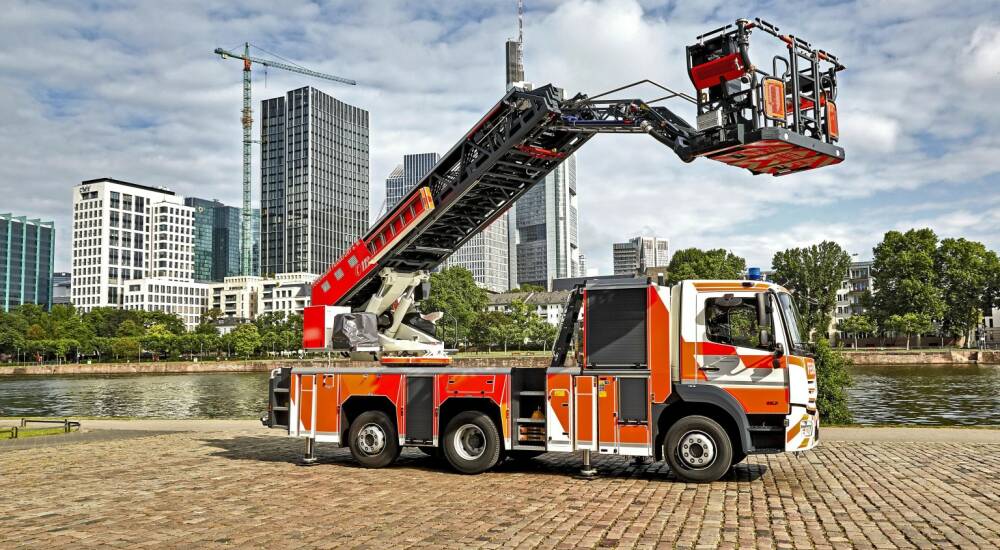 Or I buy fire fighters as a fire service fan? So we Austrians are doing really well. Anyone who wants to become a firefighter as a child and is still not one, has the world market leader. for airport fire engines (finally, Vienna Airport switched to Rosenbauer) in his own country, at his own fair, he can participate at low cost. Rosenbauer (ISIN AT0000922554). Attractive homepage, one likes to click through the photo's of fighting fire engines. Yes, the battle against the fire is brutal, not for nothing the manufacturers of fire engines are also producers of military vehicles. Off-road must be the vehicles quickly and effectively. In case of calamities, the fire brigade and the army work closely together, you need all the strength, the fire brigade and the equipment. The police in many countries also use water cannons from many manufacturers. I see this as an embezzlement, the vehicles were indeed built for the fight against the fire. From Rosenbauer I have a fire truck at home. Very small, a model car. I had to protect it from the greedy looks of my cousins, it is now behind the books. During the tour of the Linz factory I was able to get a lot of information and lasting impressions. The vehicles that are exported all over the world are really impressive. Not only are they long and strong, they also have to accelerate incredibly fast. The only obstacle was the poor acoustics, unfortunately it was too loud. Well, if you visit a factory where you work, you have to expect it. Rosenbauer is also in the fashion industry, you just have to weigh: 4 pants = 2 poloshirts = 1 share, how do you invest 50? Yes, the evil Mammon, I admit, I also prefer the stock. https://www.rosenbauer.com/fanshop/de/fashion.html

In my youth, an old steam locomotive led a crop fire, the flames were already in the houses. The fire brigade arrived, but the hoses had so many holes, all the equipment was useless. The enormous fire was bravely fought by a few housewives (who were at home, the men worked during the day) with at that time still green Hollerstauden. Of course I was there too, but my appearance as a young child was negligible. It was unbearably hot. But we won. Until the last glow, the women blew out the fire with all their violence. With bare hands and with "tools" that nobody would find suitable for fire fighting. That was a change for the local fire brigade. Because she could not help, she had to invest in new equipment. After all those years that nothing happened, you saw what could happen and you were not prepared. Many do not understand that you have to invest in fire and disaster protection, while usually nothing ever happens. For example, government money is often wasted on senseless prestige projects, and almost no one thinks of the most important thing: the protection of land and population. Rosenbauer sees the problem in many markets that there is no money for modern fire-fighting equipmentFortunately, there is a lot of money in some oil-rich countries, they can invest in fire engines, to minimize the risk of large property and especially personal injury in the event of fire (explosions, chemical accidents, as much as possible). And especially oil refineries and the like require special protection. In poorer countries one can only begin to say what loss of human lives would have been avoided if one had invested or could have invested in suitable extinguishers.

A major competitor is MagirusHe now owns CNH Industrial (ISIN NL0010545661), formerly Iveco or Fiat, whose shares are listed in Milan and on the NYSE. Incidentally, these are the Steyr tractors.

Vehicles of the competitor Ziegler I still watched the Vienna Airport tour, a few years ago (Now, as mentioned above, they have Rosenbauer). Many German cities have Ziegler fire engines. The antitrust penalty a few years ago, they could not handle the ridiculous amount of 55 million euros they sold to CIMC (ISIN CNE100001NN9), a large Chinese producer of container technology, which was also listed in Frankfurt. Imposing their home page, their range: http://www.cimc.com/en/

Oshkosh (ISIN US6882392011) is probably the leading manufacturer of fire engines in the US and US. All four mentioned manufacturers produce beautiful fire engines, I have to be honest and admit: I like to look at them all! And I am particularly pleased with the success of our Simba and Panther (more than 1,000 pieces produced and sold by the Panther). Of course I have to inform myself about the competitors, with respect for their performances and products, but my preference goes to Rosenbauer. Yes, I know, you should not think patriotic of the stock market. But I think Rosenbauer's performance speaks for itself, even without a patriotic bonus, The orders from all parts of the world testify to this.
Rosenbauer (50.63 / 52.33, -0.61%)
Vienna Airport (33.33 / 33.58, 1.52%)

Stocks on the radar: ,

Own Austria
With Own Austria you can invest in companies that guide you in your daily life. Concretely, these 250 tradable companies are included in the fund, which have the most sales and employees in Austria. A monthly investment can be made about a savings plan. The Own Austria app has an overview of its depot and is always well aware of what is happening in the 250 companies.

>> Visit 62 other partners at boerse-social.com/partner

»Correction of results on the VCM 2017 (Viennese City Marathon)

»Bitcoin vs. Bitcoin Cash – The struggle for supremacy (Heiko Geiger)

Wiener Börse afternoon: Much lower, but Zumtobel is aiming for 7

"Scanning for strong stocks, how it works (Achim Mautz)