The new BMW Z4 Roadster has been reloaded on Pebble Beach 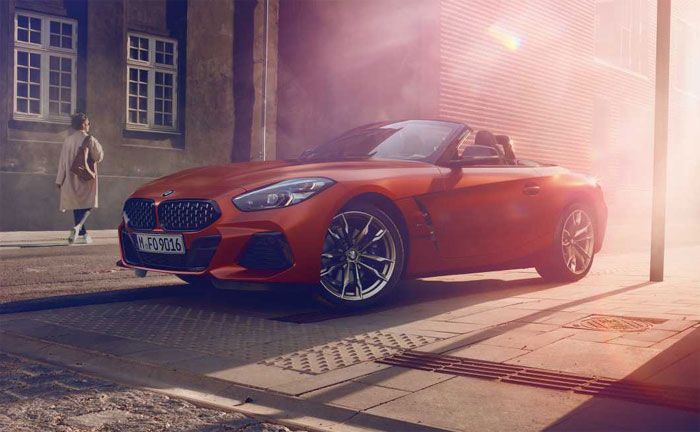 BMW presents exclusive first edition of the new open sports car on the Pebble Beach Golf Links in Monterey, California. The Sun of California brings it to light: BMW has redefined the roadster. The Pebble Beach Golf Links at Monterey, where the Concours d & # 39; Elegance will take place, which will take place a few days later, organizes the world premiere of the new 23rd August 2018 BMWZ4. With dynamic proportions, powerful design and fascinating sportiness, the open two-seater transports the classic roadster concept to the world of today and tomorrow. In Pebble Beach the premium car manufacturer from Munich presents the exclusive BMWZ4M40i First Edition (combined fuel consumption: 7.1-7.4l / 100km; CO2Combined emissions: 162-168 g / km *).

The limited edition special edition of the Roadster sensation both with the fr BMW MPerformance models typically Agilitt, precision and dynamics in driving behavior, as well as particularly high-quality design and equipment features, including bodypaintwork in Frozen Orange metallic.

The new edition of the Roadster completes its world premiere exactly at that location, which last year also served as a stage for the first public performance of the BMW Concept Z4 served. In its purist, dynamic and progressive stylistic idiom, the concept car presented itself as a vision of a charismatic sports car that is now becoming a reality with the production model.

All the view on the proportions of the new BMW Z4 leaves no doubt about the potential of driving dynamics. The central seating position for the driver, the low center of gravity, the perfectly balanced 50:50 balanced axle load distribution, large track widths and a compact wheelbase provide ideal conditions for exhilarating handling and an extremely enjoyable driving pleasure.

in the BMW Z4M40i First Edition maximally meets these expectations. For a 250kW / 340PS extremely powerful in-line six-cylinder engine and the sport suspension with electronically controlled Dmpfern, MSportbremsanlage and an electronically controlled MSportdifferenzial in Hinterachsgetriebe. 4.6 seconds are enough BMW M Performance Automobile for the spurt from standstill to 100 km / h.

The characteristic appearance of the new BMW Z4 carry the vertically oriented headlights, the BMW Kidney in mesh design, bonnet over the wheels in classic sports car style, large air aspirators on the front wheel housings and the characteristic air tipping edge integrated into the tailgate. The design of the interior also focused on the purist sportiness of the new BMW Z4 set. The driver-oriented cockpit design is supported by dynamic, forward-looking guidance. In the same way, the clearly structured layout of all controls improves the concentration on the driving experience in the new BMW Z4.

The interior of the edition model includes vernasca black leather with decorative stitching, electrically adjustable seats with memory function, the option for ambient light and the Harman Kardon Surround Sound System. Adaptive LED headlights with matrix function for high beam, the first time in a roadster available BMW Head-up display and that BMW Live Cockpit Professional with state-of-the-art network technology underline the progressive status of the traditional concept of an open sports car with two seats with the new BMW Reached Z4.

Debt of the new roadster generation on the street

The world premiere of BMW Z4M40i First Edition on Pebble Beach offers an exclusive and fascinating foretaste of the upcoming debut of the new roadster generation on the road. All details about the other engine variants, the technical innovations and the versatile functions of the two-seater are BMW known on September 19, 2018. Some time later the exhibition premiere of the new one follows BMW Z4 on the Mondial de l & # 39; Automobile (04.-14.October 2018) in Paris. The worldwide market introduction starts in the spring of 2019.

* All driving performance, fuel consumption and emission values ​​for the time being