Nasal spray for the nerves 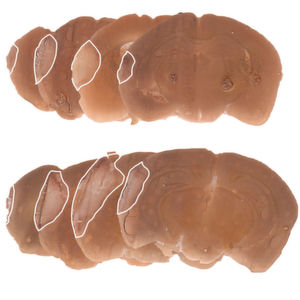 After cerebral infarction, brain regions with reduced activity remain. In these damaged areas the decay of the nerve cells progresses because the body's own protective factors are no longer produced. Researchers at the University of Heidelberg have now shown that these protective factors can also be administered nasally and can reduce the breakdown of brain tissue.

Heidelberg – "protective proteins" can be inserted into the brain through the nose, weakening the destruction of nerve cells after a stroke. This has been shown by scientists at the University of Heidelberg with studies on the mouse model. The researchers around Prof. dr. Dr. Hilmar Bading works at the Interdisciplinary Center for Neuroscience (IZN) on the scientific basis for new forms of therapy that can be used to stop degenerative processes in humans. The Bading team concentrates on the neuroprotective mechanisms of the body.

The Heidelberg researchers have already demonstrated with previous work that brain activity counteracts cell death by neurons. "We know that activated neurons produce proteins that protect against cell death," says Bading. At a molecular level, the NMDA receptor is important here. If these receptors are not in the nodes of nerve cells, the synapses, they can cause enormous cell damage and cell death. However, such toxic extra-synaptic NMDA receptors or the consequences of their activation can be suppressed. The triggers for this suppression are the proteins Activin A and SerpinB2. Their production is activated in the nervous system when the brain is active, as the research group of the neurobiologist discovered.

For patients with stroke this poses a problem because they no longer provide the damaged brain areas with the necessary activity to produce the protective proteins in sufficient quantity. This way the dying of the nerve cells continues. In this context, scientists have focused on how the protective proteins can be introduced "from the outside".

Just like Bading in collaboration with dr. Bettina Buchthal and Ursula Weiß have now demonstrated that nasal administration opens new perspectives for the treatment of neurodegenerative diseases. This is proven by the studies on the mouse model. According to Bading, the mice with stroke had less damage to the back of certain areas of the brain if treated in this way.

The researchers have thus created the scientific basis for a simple "nasal spray", which can reduce the disease-related loss of nerve cells, as emphasized by Bading. "However, many years will pass before a clinical application in humans is used, because a number of test phases must be successfully passed to the approval of a new active substance as a medicine," says the neurologist. He assumes that this "non-invasive and exceptionally simple therapy principle" is not only effective in acute brain damage, such as stroke. It can also help with chronic neurodegenerative disorders that are associated with increased activation of extra-synaptic NMDA receptors, including amyotrophic lateral sclerosis (ALS), Alzheimer's disease and Huntington's disease.