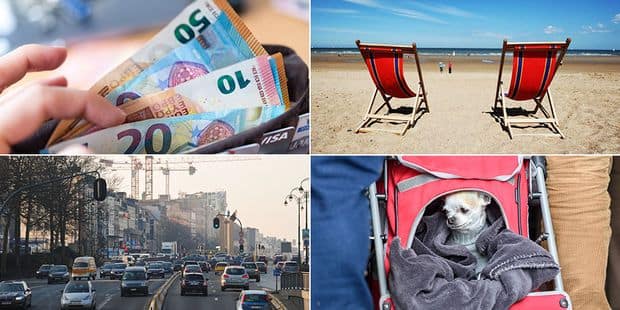 Many changes will take place on January 1st. Some have a direct impact on the life of the Belgians. Here is a selection of ten major reforms.

The net salary will rise after the last part of the tax shift enters into force. According to the calculations of the Minister of Finance, they will grow on average from 23 to 31 euros, depending on the gross salary.

The tax shift was introduced by the Michel 1er government to increase the net income for employees and thus their purchasing power in various phases throughout the years from 2016 to 2019, as well as the creation of jobs by reducing social contributions.

Specifically, with this last step of the tax shift, the non-taxable salary of each has been revised upwards and will now be uniform for all taxpayers (or 8,680 euros). In addition, the 40% tax bracket has been expanded. In other words, a larger part of the income (from 8,120 to 14,330 euros compared to 13,940 euros earlier) is imposed at 40% and is less at 45%.

On average, the net wage increases by almost 27 euros.

The principle of career unit has been removed. As of January 1, 2019, all years of actual labor count in the calculation of the pension of the salaried employees, even after 45 years of career. The measure is intended to continue those who continue after 45 years to increase their pension rights. Up to now, the sum of all full-time equivalent days, both worked and assimilated, for an old-age pension can not exceed the number of full-time equivalent days that make up a complete career, ie: ie 14,040 days or 312 days multiplied by 45 The system can be a disadvantage for people who started their professional career early.

The supplementary pension amount for a monthly salary of 3,000 euros amounts to 318 euros per year for each year after 45 years of career, according to the cabinet of the minister of pensions, Daniel Bacquelaine (MR).

The flexibility in granting parental leave is increased. If their duration does not change, they can be taken every two weeks with half a day or a day. Leave for medical assistance and palliative leave can also be taken more flexibly, for example weekly or monthly. Adoption leave is also improved and increased to six weeks regardless of the age of the child. This leave is 12 weeks in case of physical or mental disability of the child.

In addition, parental leave of one week is created for long-term foster care (at least six months).

Bpost increases its rates for standard letters and packages for individuals and small businesses. This increase is 7.44% on average. These rates mark the return to the stamps "earlier", with mail distribution the next working day, and "not earlier", with distribution within a maximum of three working days. The postal company indicates that the stamp costs 1 euro (0.97 euro if 10 bought) and 0.95 euro non-priority (0.92 euro per 10).

Bpost announces that the franking amount for a standard shipment sent to Europe will increase to € 1.40 with the purchase of at least five stamps and € 1.46 for a single purchase. For shipments sent outside Europe, the international price is € 1.62 of five stamps and € 1.68 each.

New vehicles are banned in the Brussels Region, a low-emission area. Euro 2 diesel vehicles and Euro 0 and Euro 1 petrol vehicles are added to the list of vehicles that are already banned in the low emission zone. For these engines, access to a maximum of 8 days per year and per vehicle is only possible through the purchase of a day pass.

An adjustment period is planned and the new prohibited vehicles will only be fined on 1 April.

7) The ambulance trip costs 60 euros for everyone

There will be a new billing system for ambulance services: everyone pays 60 euros each way. Wherever he is taken care of, where the 112 ambulance comes from or to which emergency service it is being transported, each patient pays the same amount. Nowadays an ambulance account is on average 130 euros. Patients can receive half of this amount reimbursed by the government by introducing a certificate of their mutual. The average cost for the patient is therefore currently 65 euros.

8) The use of the solar bench subject to medical authorization

Any large person who does not have skin type 1, the most sensitive, can use a sunbed in Belgium. From January 1, 2019 there will be two methods to determine the type of skin, to get permission to visit a solarium, details of the FPS Economy. This determination of the skin type can be done by a doctor. In this case, the user must provide a medical certificate confirming the skin type to the person responsible for receiving the solar center.

The visit to the doctor is not mandatory if the sun center has a device to determine the sensitivity of the skin. In this case, the type of skin can be determined by the person responsible for the reception or even by the user himself.

9) Entry into force of the Walloon Animal Welfare Code

The first Walloon code of animal welfare, of which Article 1 states that animals are sentient beings, comes into effect on 1 January. Now a permit is required to hold an animal. Abandonment, neglect and abuse are forbidden, as is the obstruction of their freedom of movement. This text, which consists of 12 chapters and 109 articles, is supported by the Walloon minister Carlo Di Antonio (CDH) and mainly concerns the detention of animals, prohibited practices and the permitted interventions, their trade, their transport and their introduction to the Walloon territory. Their murder and animal testing are also more strictly regulated.

The identification and registration of dogs and cats are also mandatory, under certain conditions and the contribution requested from the owner at the time of registration contributes to a protection fund against abandonment and animal abuse that benefits the shelters.

The amount of the fine with respect to tax adjustments will increase from 23% to 24% from 1 January. For fiscally authorized capital, the interest rate, which is 38%, amounts to 39% in 2019. This percentage increases annually by 1% until 2020.

Thanks to the international exchange of financial information developed by the OECD, the tax authorities now know much more about money held abroad by Belgians. Holders of an undeclared account therefore have every interest in a tax adjustment, subject to the payment of a fine, under penalty of criminal prosecution.