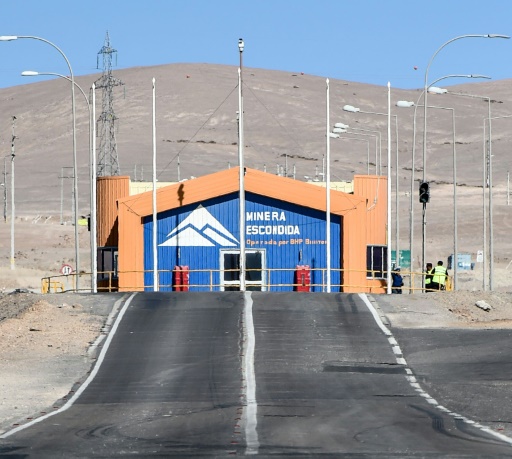 L entry of the Escondida copper mine on February 16, 2017 in Antofagasta, Chile. Martin BERNETTI

Employees of the Chilean copper mine in Escondida have signed Friday at the company, controlled by the Anglo-Australian giant BHP, an agreement that avoids a strike in the biggest deposit of the world, announced the direction.

The Sindicato N ° 1 of Trabajadores, main organization of the site, "the company announced its approval for the agreement reached during the conciliation process," the management said in a statement.

"After this ratification, this afternoon was the signing of a new collective agreement," she said.

The agreement was concluded as part of a mediation planned by law. The two parties agreed to resort to this conciliation after approval by the majority of the members of Sindicato No. 1, representing 2,500 members, of the principle of a new strike.

Last year, the Escondida mine was hit by a 44-day strike, the longest in the history of the Chilean mining industry.

The terms of the agreement signed on Friday were not announced by management or by the trade union. According to reports from the Chilean media, the two sides agreed on a final conflict bonus of about $ 28,000 and a salary increase of around 2.8%.

Employees initially claimed a bonus of $ 34,000 and a wage increase of 5%. The mining sector is one of the highest wage activities in Chile

The trade union announced that the Friday signed agreement was approved by 93% of its members.

"We were able to defend our interests and we were able to continue with issues that had been postponed for a long time," said spokesman for the trade union Carlos Allendes.

The new contract is valid for three years and will only benefit the members of the Sindicato. No. 1.

The management has also expressed its satisfaction. For Patricio Vilaplana, a Minera Escondida manager, this is "an agreement that pleases employees and their families as well as Escondida's need to be reliable over time."

The 2017 strike had caused losses of $ 740 million to the company and resulted in a fall of nearly 1.3% of Chile's gross domestic product.

The government welcomed the development on Friday. "The country is winning with these agreements," Minister of Mines Baldo Prokurica said. "The employees benefit, the company gets security and the country also has the possibility that there is progress and development and that it generates taxes," he said.

The Escondida mine is located in the Atacama desert, in northern Chile, at 3,100 meters above sea level. It produces about one million tons of copper per year.

Its production and that of other Chilean mines make Chile the world's largest copper producer, with nearly 5.6 million tons per year, or a third of the world's supply of red metal