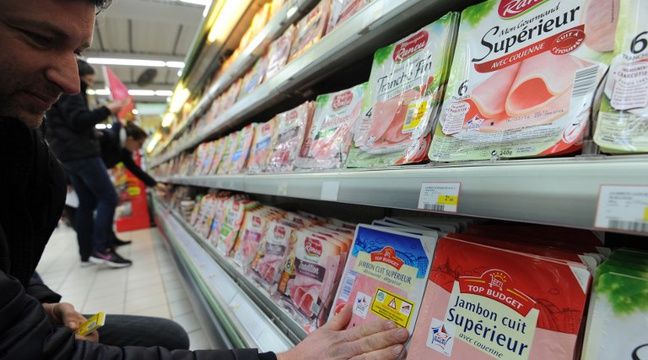 Farmers denounce the bad practices of industrial ham. They accuse them of "circumventing" the labeling legislation. A topic that was of importance earlier
Voice of the Food Act in September at the Assembly

Breeders' Unions shared their outrage on social networks. The FDSEA (Departmental Federation of Farmers' Unions) of Mayenne and the
FRSEA Pays-de-Loire have criticized the Fleury Michon group over the last few weeks for having affixed a sticker with a picture of French breeders on the packaging of ham of Spanish origin. They are also directed against the Herta group, which has not specified the origin of the group
Pork on ham made in France

French breeders, for example, participated in the launch of a series of ham origin France without GMO and antibiotics. They had the unpleasant surprise to find their group picture on the label of a bag of ham from Spain, says Philippe Jehan, breeder and president of the FDSEA Mayenne and manager of the FNSEA.

Just before the summer a meeting took place with the Fleury Michon group, on which the trade union reported its grievances. "We had a consultation with the repression of fraudsters who did an investigation, of which we do not yet have the conclusions", confirmed Philippe Jehan.

"One can understand that it was misunderstood or misinterpreted by breeders who are keen on commodity prices," AFP David Garbous, Innovation Strategy Director of the Fleury Michon Group , which refers to an "action to promote the industry". "We agree with them that next year we would only place the packaging of the" likes "products, ie the products directly concerned.

According to the group, the hampkets have been accused only 1%. of the weekly production of the plant concerned, 6,900 sachets.

Weighing on the debate

For the breeders, the media coverage of these grievances also aimed at "weighing on the importance of" labeling & # 39 ;, in a & # 39; decision period & # 39; before the vote on the Food Law planned for the start of the school year. "The text as it is is not enough", said Philippe Jehan. According to him, "Made in France does not mean that it is produced in France": it picks up products other than ham, such as aubergine or Charentais melon.

Bill Agriculture and Food must be re-examined in the National Assembly from 12 September.

>> To also read: Public canteens. By 2022 half of the products must be organic or ecological, vote for the deputies

>> To read: will the increase in prices in the food really benefit the farmers?

>> To also read: The countries of origin of the honey must be labeled on September 1, 2019