Iraq: disruptions in the vicinity of strategic infrastructure in the oil region 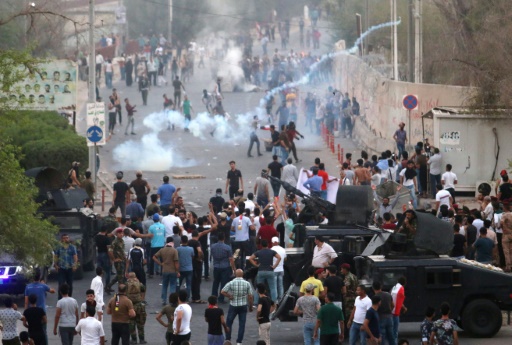 Photo of skirmishes between demonstrators and security forces in the Iraqi city of Basra, 31 August 2018Haidar MOHAMMED ALI

Hundreds of protesters are blocking Sunday's strategic issues in the oil province of Basra, the birthplace of a social protest movement, and have been in the grip of a health crisis to date, an AFP correspondent reported.

Dozens of demonstrators gathered on the road to the Ben Omar oil field, which currently produces more than 40,000 barrels of oil a day.

Iraq recently signed a Memorandum of Understanding with the American company Orion Gas Processors to process and exploit the gas from this oil field, which is also the subject of negotiations with other companies, including the Chinese and American Exxon. .

Eventually residents moved back together at the headquarters of the governor in Basra, where demonstrations took place on Friday and Saturday.

Large police and military cordones have been erected around a large perimeter, as in many other places in the oil province, which are faced with a cruel lack of infrastructure.

Oil exports reached an annual peak in August with nearly 112 million barrels sold for more than $ 7.7 billion, according to the Department of Oil.

Most people, especially in Basra, are of the opinion that they do not benefit from the juicy recipes of black gold and complain about galloping unemployment in a region where oil companies mainly employ workers. foreign.

In early July they had launched demonstrations in Basra, which then spread across the south of the country to demand better public services.

In addition, the province of Basra faces an unprecedented health crisis for three weeks: almost 20,000 people were admitted to hospital for poisoning after drinking water from the Shatt al-Arab.

Agriculture also suffers from this water pollution, coupled with a drought, which is important this year.