The Bandas will invade Goé 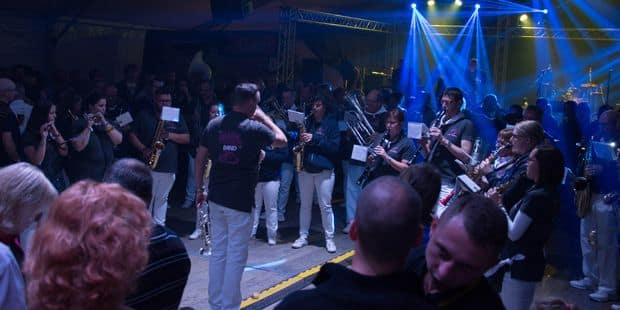 Lim & # 39; Bougezvous, the international bandas festival organized in Goé, has clearly found the winning formula and its audience. No less than 5,000 people have struggled last year with these notes that invite to party and dance.

"This is the first time we have achieved this fate and we want to confirm this clearly", assures Jonathan Chanteux, a member of the non-profit organization and head of Musica Gogo Hé, who comes from a supported summer in France.

The concept will remain the same, with a VIP night animated by a band and different bands, a Saturday day that will mix bandas and tributes and finally the day of Sunday that will be proud of families.

"In terms of atmosphere is the coolest day Friday with a formula that has surprised more than one, but we have rejected ten tables last week in 2017. We have again chosen to limit ourselves to 27 tables, or 270 guests and we can still 20 people please (60 euros excluding VAT, all-in 19 h-22 h) while our reservations from July at the last edition were complete. " After Seven & # 39; s copper, the Delirium Tremens Band (Dalhem), no longer present, Musica Gogo Hey and Musicaband's Tourcoing will enliven the evening until the end of the night.

Saturday and Sunday in music

On Saturday, in addition to the four groups present at the opening, the audience will be able to swing with La Banda Jojo, eight professional musicians from Caen, Montauban's Les Croques Notes, the Hammers, the Remix Band from Visé, both from the Second Maas and also Dubent, present the first year and since then exploded …

"Seven hours of music on the three stages (two outside and the tent of 800 m2.) And last but not least, the Lipstick tributes play Balavoine and Michel sings Sardou." Admission is set at 10 euros (7 euros in presale).

Sunday, after mass, banda & # 39; s until the late hours with the locals of Musica and the French of Tourcoing and Montauban … Undoubtedly discover …

In four years time the budget of the festival has gone from one to double. In order to organize Lims & # 39; ougouvous from now on, the association of the same name needs 100,000 euros to bind its event. Without a single public money and with very different restrictions from their French counterparts "who receive subsidies from the state to promote the culture, but it is a conscious choice that we made in the beginning", Jonathan Chanteux assures, also ships of Finance of the municipality. "When we have partnerships with French groups, the organizer automatically pays for the coach, but when there is no partnership, only Musica Gogo Hey (NdlR: who is not the organizer of the event), we also have to pay the group, so our artistic budget is 20,000 euros. We also made a big investment this year by inviting three French reference groups and a Dutch group that has been asked everywhere since we gave them their chance. " And the return of Dalhem will only strengthen the bandas phenomenon in the region.