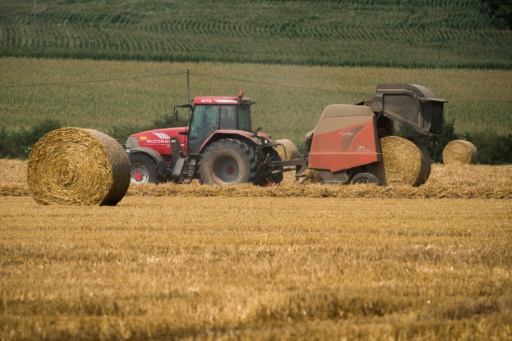 A tractor at work in a wheat field of Saint-Philbert-sur-Risle, Normandy, 27 July 2018JOEL SAGET

In a breakthrough that could helping to feed the growing world population over the coming decades, scientists announced Thursday the sequencing, for the first time, of the complete genome of wheat.

"This will significantly accelerate our efforts to identify wheat genes that are important for agriculture, including those that could help fight the biggest fungal diseases," Kostya said in a statement. Kanyuka, researcher in functional genomics for Rothamsted Research

Wheat feeds more than a third of the world's population and accounts for almost a fifth of the calories consumed by people.

it is more difficult to grow in hot, dry climates, and these conditions are expected to increase with climate change.

Sequencing "will be enormously and immediately beneficial for wheat producers, which will accelerate the development of new elite varieties", Kostya Kanyuka.

Wholegrain genome was "a huge challenge", which lasted 13 years because wheat contains five times more genes than a human being (107,891 versus 20,000), according to a report published in the journal Science.

type of wheat sequenced, by 200 scientists from 20 countries, is common wheat (Triticum aestivum), the world's most grown grain in area, according to the study carried out by the International Sequencing Consortium of the wheat genome (IWGSC)

"Wheat production must grow by 1.6% per year to meet the demand of a projected world population of 9.6 billion by 2050," according to the report.