The flames destroy a shed and a house in Hubermont 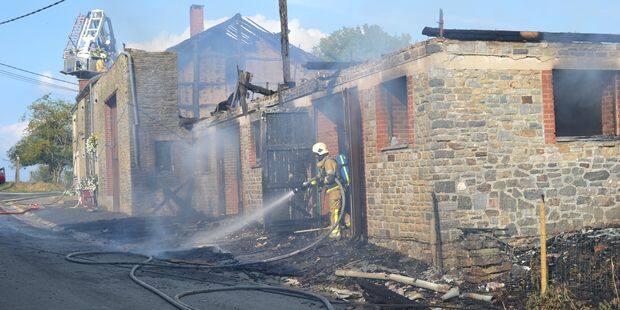 A violent fire broke out on Tuesday afternoon in the village of Hubermont. The flames destroyed a renovated house and a farm shed.

"People saw flames on the side of the bales stored outside. By the time they call for help, the fire has already spread to the nearby hangar."One of the officers in the rescue zone said:" Important resources have been deployed on the spot to deal with the incident: two gears, two pumps and several tanks, two of civil protection. .

We regret no injuries, but the material damage is very important. "These were old buildings separated by half-timbering. Given the heat that has been going on for several weeks, the woodwork has lit like matches ", we observe on the side of the firefighters. The barn was owned by a farmer in the village. The house was inhabited by a few newcomers who had lived for only three months. They had promised to renovate the building. The Bourgmestre de La Roche came down on the spot. The intervention of the fire brigade was still underway in the late afternoon. ORES was there too. Part of the village was temporarily deprived of electricity. The causes of the incident are currently unknown.