Viroinval: "The lack of firefighters is different" 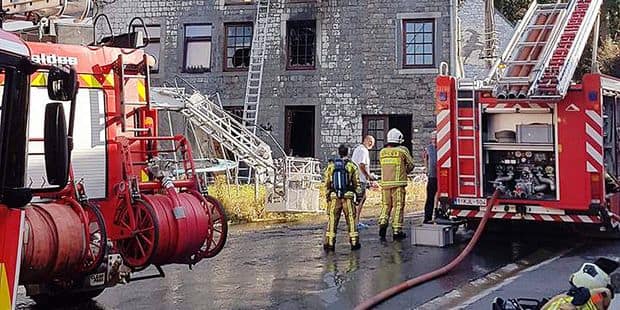 A fire destroyed a house on Saturday. Only two firefighters were present in Couvin

Last Saturday around 15.00 hours a big fire broke out in a house on the Kapellestraat in Vierves-sur-Viroin. The fire brigades of Couvin, Philippeville and Haybes (France) went on the spot. The fire threatened the neighboring houses.

"When they arrived, they had to make a choice. For ours, the one where I grew up, it was too late. On the other hand, they managed to limit the damage, because a neighboring house only has damage to the roof, the third was spared", notes the owner of the house Lili Brisbois.

Lili Brisbois recognizes the firefighters and is not bitter against the Minister of the Interior, Jan Jambon, to whom she intends to do something. "To thank him for endangering the lives of citizens"she says.

When the call was given to the fire brigade, only two men were available in the Couvin barracks. "It is absurd to see that French firefighters have to fill the holes. When they arrived, they wanted to pull a pipe to the Viroin, but it missed one meter while there was a fire hydrant at the truck. They do not know the Belgian system."

Contacted, the lieutenant couvin Piet Van Trimpont confirms that the lack of personnel is a real concern. "Normally there are six professional firefighters in Couvin on weekdays. When it comes to holidays, it happens that there is only one, or not at all. As far as cooperation with French services is concerned, it is usually developed, even if their protocol for fire attacks is not the same. If there was a problem with them on Saturday, it was an incident."

Far from pointing fingers at the French firemen, Lili Brisbois also wanted to pay tribute to the men who had intervened on the spot. "Despite the tensions, the conditions and the residents to manage in addition to the fire, they showed coolness, professionalism and empathy. They proved that they would face the flames to the end and that they would not take that block of three houses with them. & # 39;