Europa League: Bordeau's interim coach believes that "Ghent is a well-organized club with a strong core" 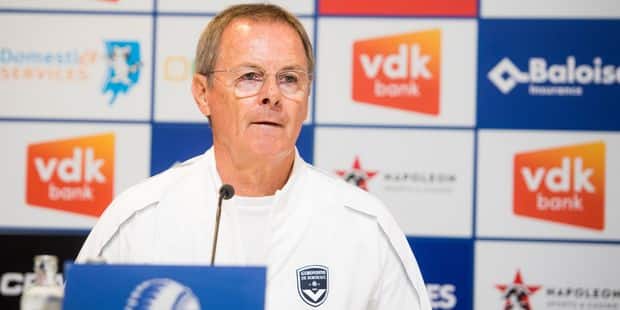 Eric Bedouet, 64, is currently acting trainer of Girondins Bordeaux, after the resignation of coach Gustavo Poyet and before the appointment of his successor, probably Thierry Henry. Bedouet was present Wednesday at the press conference on the eve of the Europa League knockout match at La Gantoise. The press officer of the team welcomed everyone warmly, but immediately indicated that only questions about the competition could be asked.

Prohibition to mention the name of his successor on the Girondins bench. "It's not easy nowadays to become a coach in Bordeaux, I took over as interim coach, but I did not really like it, better for the club, the players and myself," said Eric Bedouet. "As a player in my 15-year career I have had about 20 coaches, I am not young and I have had such coach coaches all the time."

Eric Bedouet knows La Gantoise well? "It is a well-organized club, they can play in different systems and they also have a very large and strong core, and reserve players who come in the last quarter can also make a difference." , they can change very quickly in a match, our other opponents in Europa League (Ventspils and Mariupol) were also very strong, but I think La Gantoise is in a higher category, but I do not want to give My team is defeated, on the contrary, we have recruited new players this season, they are inexperienced and it became clear at the start of this season. "

Is he aware of the arrival of the new head coach? "We do not know anything at all, everything is decided by the board, we are here as a club to play against La Gantoise, and this game can be a turning point, I hope at least to reach the groups. we are being launched, all my core is available, there are a few changes needed A busy schedule awaits us with both matches against Ghent and Monaco, "said Eric Bedouet.

Kamano (Bordeaux) expects a stronger opposition against Ghent: "We are prepared"

Opponent of Ghent in Europa League Thursday, Bordeaux started badly the championship of France. The Girondins were defeated at home by Strasbourg (0-1) before they lost the derby of the Garonne against Toulouse (2-1). Author of the Bordeaux goal Sunday, François Kamano is aware of the difficult time that his club is alive and that Ghent will not be a demobilized opponent. "As we have always done, we try to forget our last defeat by immediately focusing on the next game, which is the logical consequence of our worries for a while." We remain players who concentrate on the game. We are moving to a different competition, personally, I feel very good, I am well prepared during the training, it is reflected in the games I play, I try to give everything. my level, "Kamano said.

The atmosphere in the club is not good with the coach, Gustavo Poyet, fired. "We have to adjust every time, sometimes it's complicated because we do not know what's going on emotionally, it can work, but mentally, it does not change anything for me and I think the same goes for the team, which is our most is the result of the team and these results should be better. "

With zero points out of six, this is not ideal before we meet La Gantoise. "Everyone is aware of the situation, we will try to rectify the small mistakes in Toulouse, we have to bring down at least one point, we should not stay there, and in the Europa League the level is the more we advance in this competition. , the more we know that the cursor is placed higher, Ghent, which is doing well in its competition, will be a strong opponent. "