Europa League: in anticipation of Henry Bordeaux brings a good draw from Ghent 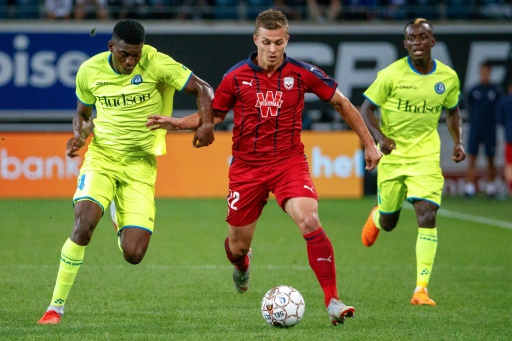 Bordeaux striker Nicolas De Préville, center, tries a breakthrough in the defense of the Taiwo Awoniyi (G), on August 23, 2018 in Gand KURT DESPLENTER

In anticipation of the likely arrival of Thierry Henry on the bench, Bordeaux placed a draw (0-0) on the lawn of the Belgians of Gant, Thursday in Ghent in the first stage of the Europa League.

While the interim coach Eric Bedouet had made a major turnaround, the Girondin team, which started the championship with two defeats against Strasbourg and Toulouse, was somewhat reassured after three days of shock at home against Monaco, Sunday.

The Girondins are a bit in favor of qualifying for the group stage, but they will show a much better face next week to achieve their goal and get rid of heavy Flemish training.

"We are doing well, we are better than the last defense games, the link between the lines, it is not perfect, but it is good, in spirit and dedication, I really liked it," said Eric Bedouet.

On the eve of the dismissal of Gustavo Poyet, who had been fired a week ago, and his leaders, which should lead to the resignation of the Uruguayan technician, the Girondins, not very inspired but courageous, ensured that the essential for the Ghelamco Arena: do not lose.

They were, however, especially late in the game, and it is La Gantoise who offered the best opportunities. But the Belgians had a cruel lack of efficiency and could regret it in a week.

"We have had many opportunities, but we have not managed to make it happen", said the Belgian coach Yves Vanderhaeghe, "except that I am happy with the team play and tactics of the team, because we are never in danger brought. "

For the return match on his lawn next Thursday, Bordeaux could then be coached by Thierry Henry, because according to RMC Sport, the world champion of 1998, current assistant of the Belgian coach Roberto Martinez, would have agreed on Wednesday to join the Girondins. close, once the departure from Poyet formalized.

In the absence of landmarks, Bordeaux still had the first opportunity of the match: after a poorly cleared corner, Nicolas De Préville shot a fly saloon 20 meters long that blocked the bar (4).

But La Gantoise immediately responded by the former Jean-Luc Dompé of Amiens, who shot at full speed on a pass from Taiwo Awoniyi (6). Then Roman Yaremchuk did not find the frame on a head (18).

It was then necessary to wait for the second period to see the game come to life.

So, in the ideal position at the entrance to the surface, Giorgi Chakvetadze steered his shot far to the stands (50), after which Awoniyi, only six meters away, completely closed his recovery, much to the delight of Benoit Costil (71). ).

The goalkeeper from Bordeaux was decisive on a powerful shot by Stallone Limbombe (83) and on a curling shot from Yaremchuk (85), before he was saved by a right-wing shot in the extra time on a distance shot by Vadis Odjidja (90 + 1).

Abandoned, the Girondins have not been destroyed this time. It is rather favorable for the next deadlines waiting for them …