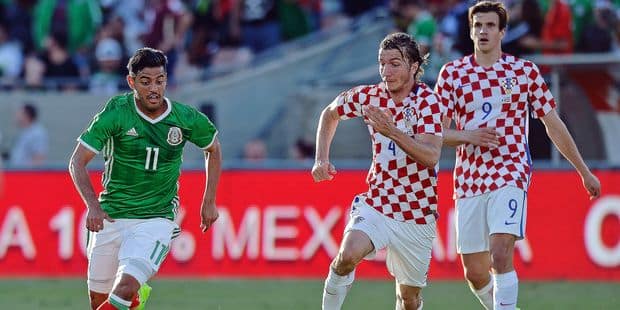 The performances and especially the seven goals of Ivan Santini in Anderlecht have not gone unnoticed in Croatia.

Zlatko Dalic, coach of the vice-world champion, has selected Santini for the matches in Portugal (in friendly) and Spain (for the Nations League). Santini was in the selection of 30 players for the global, but not in the 23. Hein Vanhaezebrouck allowed him to attend the final in Moscow. Santini has only two caps in national team A, in May and June 2017.

4 other D1A players in the selection of Croatia

No less than five players from the Jupiler Pro League are on the Croatian national football team for the first post-World Championship.

The checkered team, after the international retirement of his defending champion in Danijel Subasic, is expected to promote Kalinic as N.1. Karlo Letica, who arrived in Bruges this summer, takes the opportunity to be called for the first time at 21 years.

With Matej Mitrovic there is still a Bruges in the selection. This summer, Mitrovic was definitively transferred to the Venice of the North and was ousted from preselection for the World Cup, just like Ivan Santini, the current top scorer of the championship with Sporting Anderlecht.

Croatia, beaten in the World Cup Final by France (4-2), will play the match by a friendly match against the Portuguese European champions on September 6 in Faro. They will then start their career in the League of Nations, new continental competition, against Spain in Elche on 11 September.

The Croats are in Group 4 of the first League of Nations with Spain and England. Only the winner of the group qualifies for the semi-finals, scheduled for the beginning of June 2019. Note that a qualification card for Euro 2020 will be awarded in each of the four sections of the League of Nations.