Thierry Neuville: "I have done better than Egier" 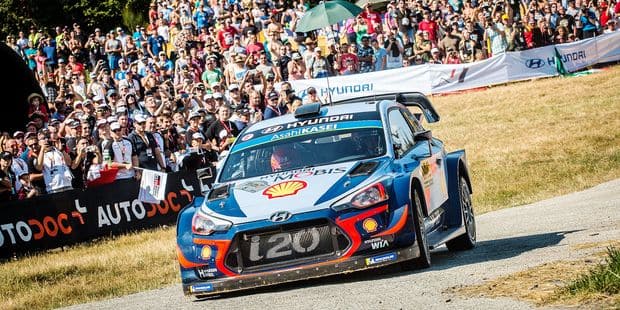 The Rally of Germany is finally better than expected for Thierry Neuville and Nicolas Gilsoul. By taking advantage of Sebastien Ogier's flat tire on Saturday and the simultaneous withdrawal of Dani Sordo and Jari-Matti Latvala on Sunday morning, the Belgian team finally ended in an unexpected 2nd place and gained two extra points than its competitors. great rivals in the title race. Four points from goal, our representatives now have 23 points ahead of Ogier.

Thierry, a second place behind Ott Tanak, 19 points, two better than Ogier, are you doing quite well?

"Indeed, we had a difficult weekend, we had trouble finding the right pace for several reasons, we had a differential problem before Friday and by the time the team checked it, we had to give those of Corsica that did not fit I was a bit misplaced in my environment, maybe I paid a bit for my position as leader of the championship, I could not take all the risks, but also in control But in the end the result is pretty satisfying. "

At one point you finished fifth. But you did not get angry, you did not force or did not make a mistake to go up.

"It's the so-called managing of a championship, I can not afford to be abandoned, so I stayed calm, I kept a smart approach, which was not the case with Sébastien." Ogier, frustrated at being behind his former Teammate Tanak took great risks in Panzerplatte and hit a 250kg rock in a rope, resulting in his flat tire, eventually losing more than he could have won. "

How do you explain that you could suddenly sign the scratch on Sunday morning?

"We did well on Saturday night, I placed the same rear shock absorbers as Dani Sordo, softened and gave more confidence and traction while braking in the sand."

You were hoping to score more than one point in the Power Stage?

"Yes, but I was too optimistic and I missed a crossroads at the beginning of the stage, I had to drive backwards, I lost a handful of seconds and a few important units."

Next step, Turkey, a new rally where you are handicapped by your opener position …

"That may be the case until the end of the year, we will try to control that at its best." There will apparently be a lot of sweeping, but on the other hand it looks very fragile, which is pretty good for the Hyundai. "

23 points ahead, it starts counting.

"It's better to have them in advance, but we've seen this weekend because it can change quickly." "If I give in Turkey and Ogier wins, I'll be 2nd in the championship." "It will be necessary to keep rolling with his head." until Australia becomes champion.