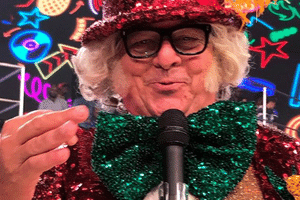 Stepan Nercessian, more participations of Eduardo Sterblitch (will be 20 years old as communicator at 40), Gianne Albertoni, Thelmo Fernandes, among others, and directed by Andrucha Waddington, the first film, "Chacrinha – O Velho Guerreiro". National launch on 25 October.

Then TV, a series of 4 chapters, an exhibition in January and as a novelty the recording of testimonies from people who were important in his life, among family, friends, friends, singers and singers.

In addition to "Chacrinha", also before the start of next year, Globo has already programmed the exhibition "If I close my eyes" already, adaptation of Ricardo Linhares of the work by the journalist Edney Silvestre, with Antonio Fagundes and Mariana Ximenes in the main roles.

Open the fan
Publications on social networks have also become very important in the lives of many artists.

For example, the announcement of the Volvo hybrid car, made by Xuxa. It is valued at nearly R $ 500 thousand and is included in the 300 owners in Brazil. And you love the toy.

Good time
Xuxa, even from the air, lives one of his best moments in the commercial field since he leaves Globo.

It has four campaigns in the air, under mobile telephony, cosmetics, department stores and vaccination of children.

At his funeral the owner, Amilcare Dallevo, even said that she would not be forgotten. And it was not. One of the new studio's has just been named Andréia.

series
"Parents of the first", final title and registered, is another series of comedies that are underway in the Globe.

It will be directed by Luiz Henrique Rios and Daniela Braga, cast under the direction of George Sauma and Renata Gaspar and will run around a first time father.

What is life?
The Band, TV, has the problems everyone knows, with RedeTV !, and tries to keep the fourth place. Average / day oscillating between 1.1 and 1.2 points.

Everything differs from Band FM, the first place in São Paulo, with an estimated audience of 216,000 listeners per minute. And this for a while.

In tests
The SBT uses a second technical team to perform tests with 4 and 6k cameras in the recording of the novel "Poliana".

This new equipment will be used permanently from January.

finish
The film "Carlinhos e Carlão", with Luís Lobianco as homophobic during the day, but an extrovert and charismatic gay at night, entered the post production phase.

Filmed in Rio, he also has Otávio Augusto, Thiago Rodrigues, Letícia Isnard, Luis Miranda and Thati Lopes, among others.

Maroquinha
They say that there is even someone who proves that Ivete Sangalo's long friendship with Xuxa, and vice versa, has not been the same for some time.

Yes, there was a misunderstanding behind it and even a public apology on Instagram on the singer's birthday. For the social effects everything is fine, everything is very good, but for the next it has cooled down and still has not the same temperature as before resumed.

First scene
On Tuesday evening, 22.30 hours, a "Master Chef Professionals" start at Band. This is the first scene of the program, with Ana Paula Padrão receiving the participants.

Of the 26 participating, only 14 are in the competition. Face is eliminated 12.

Almost at the end
The series "Z4", partnership Disney, SBT and Format, is counting down.

At the opening it goes to the 29th and on pay television it ends soon after. There is also the possibility of exhibition in Latin American countries.

Beat – discount
• Wow … They have reduced Silvio Luiz's program on RedeTV!
• … He had half an hour. He dropped to 15 minutes and now, since yesterday, he is only 10.
• Confirmed: Ana Thais de Matos switched from SporTV to Globo radio. Certainly.
• So far, SBT has at least decided nothing about its programming with the departure of Disney …
• … But you should not get too much of it: more drawings in the morning and "Sunday Legal" spiked.
• The "special connection" of the future, 6.30 pm, will speak today about the 60 years of Bossa Nova …
• … The program receives as guests the composers and musicians Roberto Menescal and Marcos Valle.
• The victory of "Malhação – Viva a Diferência" as best novel on the II ABRA Award, Friday, in São Paulo, was highly commented on Globo …
• … And it only proves the good phase of the schedule, also now "Vidas Brasileiras".