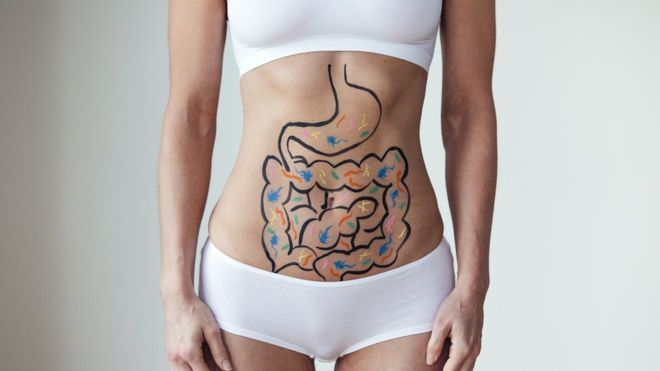 It has more neurons than the spinal cord and works independently of the central nervous system.

What are we talking about?

Of course, the gut was not the first option you thought about when analyzing the question, but it's about it – and that's exactly why many think of it as the "second brain" of the body.

This & # 39; independent & # 39; brain in our gut and the complex microbial community influence our overall well-being.

That is why doctors increasingly believe that the function of our digestive system goes far beyond just processing the food we eat. What's more, they examine whether it can be used for the treatment of mental illnesses or the immune system.

The BBC spoke with Dr. Megan Rossi, an Australian specialist in gut health, to find out why we should give more attention to our bellies. Here are some surprising facts about our "second brain":

"Unlike any other organ in the body, our bowels can only function, it has its own autonomy to make decisions, it does not need the brain to tell it what to do," explains Dr. Rossi out.

What the gut "reigns" is the so-called enteric nervous system (SNE), which is a "branching" of the autonomic nervous system of the body – responsible for the direct regulation of the digestive system.

This nervous system extends through the tissue that forms the stomach and the digestive system, and has its own neural circuits.

Although functioning independently, it communicates with the central nervous system (CNS) via the sympathetic and parasympathetic systems.

2. 70% of the cells in our immune system live in the intestines

According to Rossi, the health of our intestines is the key to our disease immunity.

She says that more recent research indicates that if you have intestinal problems, you are more likely to be more vulnerable to common diseases, such as the flu, for example.

It is not just food waste: about half of our excrement consists of bacteria.
Many of these bacteria are good, so fecal transplantations can be a vital treatment for some patients with a weakened intestinal microbioma.

On the other hand, still talking about feces, the BBC Rossi asked how often it is normal to go to the toilet.

The specialist said that according to research it is considered normal to defecate 3 times a day to 3 times a week.

4. The more varied the diet, the more diverse the microbiome

Billions of microbes live in our tummy, which have different foods. These microbes are essential for digestion because their activity allows our body to absorb certain nutrients from food.

"I would like to say that microbes are like our pets, so you have to take care of them and feed them," says the specialist.

Different microbes thrive on different foods and therefore the gut microbiome improves with a varied diet.

According to Rossi, a rich and varied microbiome is associated with a larger intestinal health and consequently a greater general well-being.

On the other hand, people who always eat the same things have a less good microbiome.

5. Your gut is linked to your stress levels and mood

If you have intestinal problems, it is, according to Rossi, something fundamental that you have to do to see how much stress you are undergoing. & # 39;

"In my clinical practice, I always tell patients to meditate for 15 to 20 minutes a day, after doing this every day for four weeks and making a habit of it, I can see that it only improves symptoms."

So "de-stressing is very important," says the specialist.

It is also interesting to think that the majority of the serotonin of the body, estimated at 80% to 90%, is found in the gastrointestinal tract.

Serotonin is a neurotransmitter that affects many bodily functions, such as intestinal peristalsis – the involuntary movement that the gut makes to push the food bolus and allow digestion to take place in the right place.

It is also associated with many psychiatric disorders. Your concentration can be reduced by stress and it affects mood, anxiety and happiness.

Several studies in humans and animals have provided indications for differences in the gut microbiome of patients with mental disorders, such as depression.

Therefore, a starting area of ​​psychiatric research has to do with prescribing "psychobiotics": essentially a probiotic cocktail of healthy bacteria, to improve mental health.

6. If you are afraid of the effects of food and consume it … then beware

It is true that there are some more sensitive intestines than others, but according to Dr. Rossi, surprisingly recent research, suggests that if you are afraid of a particular food and eat it, you can physically develop your symptoms.

"In the clinic, I constantly see how convictions can cause bowel problems."

There are many people who believe, sometimes because of a craze, that gluten or lactose will harm them, without actually having an allergy or intolerance.

7. You can improve your digestive health and your intestinal microbiome

Here are some ways to improve your gut health according to Megan Rossi:
▪ Follow a diversified diet to diversify the intestinal microbiome;
 Reduce stress by meditating, relaxing, being attentive or yoga;
 If you already have symptoms of a bowel problem, it is best to avoid alcohol, caffeine and spicy foods – they can aggravate it;
 Try to sleep better: a study has shown that if you change or interrupt the biological clock by changing your sleep pattern, it also damages your gut.