Woman has amputated toes after session of pedicure with fish A resident of Perth (Australia) all right toes amputated after undergoing a pedicure session in which fish is used.

Victoria Curthoys decided in 2010 to try out the aesthetic service in a spa during a trip through Thailand. The procedure is to put the feet in fresh water and let the fish eat a dead skin, so that healthy skin is created again.

The Australian infection by a bacterium identified as shewanella, which according to doctors "ate" her foot bones. The solution, to prevent the spread of the disease, was to amputate the fingers, according to a Metro report.

First, the thumb was amputated in 2012. It did not help to control the progress of the infection. In the following years the doctors had to cut off the other fingers. The latter was removed in November 2017, when the Australian was 28 years old. 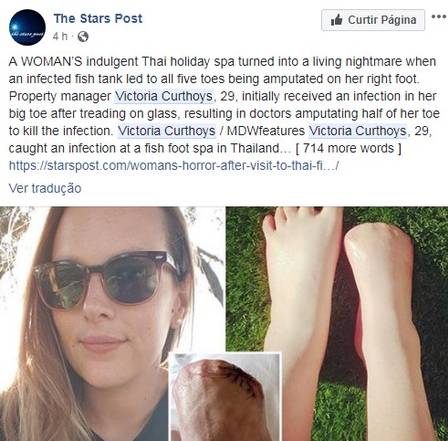 Victoria often places images of the right foot to warn of the risk of alternative & # 39; aesthetic procedures Photo: Reproduction / Facebook

"I can honestly say that my foot has never been as healthy as now, I can now put pressure on my foot"said Victoria. "At the end of the day I saw people with injuries much worse than that I find myself happy"she added.

In July of this year, an article published in the medical journal "JAMA Dermatology" described another case of problem patient after pedicure with fish. The young woman in her twenties has suffered fall of all toenails after the procedure.

The use of fish as pedicures runs the risk of being contaminated, because water is usually not changed and the same animals serve different customers. Ultramarathonist stops during the 43-hour test to breast-feed Fortunately for 1 month of the daughter's life, the couple "Rick Candy" thanks the Fatima do Sul health team Gusttavo Lima cancels show and is recorded in BH